West Orange-Stark gears up for Nederland Bulldogs: “We are all ready to roll” 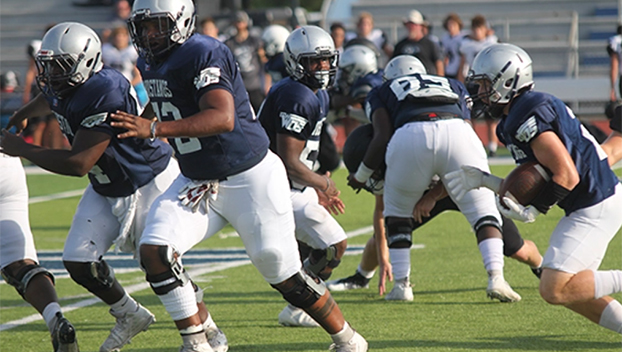 The WO-S running game was impressive against the Vidor defense in scrimmage action. (Van Wade/The News)

WEST ORANGE – It’s time to get down to business for the West Orange-Stark Mustangs.

After looking solid in their two scrimmages with Woodville and Vidor, the Mustangs open up their 2022 campaign in the friendly confines of Hooks Stadium Friday night when they host the Nederland Bulldogs.

“I’m so excited about it and so are the kids,” said Hickman. “These kids here, they know what it is all about. We are all ready to roll. Everyone is fired up, the band, the cheerleaders, the drill team, nothing beats that Friday night atmosphere.”

The Mustangs are on a quest for their 12th straight district title. They are also on a mission to reach the Class 4A Division II Regional Finals for the 11th time out of last 12 campaigns. Sandwiched between all of that were four trips to the 4A Division II State Championship games (2014-2017) that saw them win back-to-back titles (2015-2016).

The Mustangs and Bulldogs have had some great battles over the years with WO-S ruling the all-time series. However, the Mustangs are looking to avenge a loss to the Bulldogs last season. Nederland won that opener 14-6 with the game called off late in the third quarter due to bad weather.

Coach Hickman and the Mustangs staff like what they see out of the Bulldogs after watching film of their scrimmages.

“What we notice the most is their size up front, both on the offensive and defensive lines,” said Hickman. “They always seem to have that and they like to get physical. They look really huge on film, and we’re going to have to find ways to attack it. One thing about Nederland, the Bulldogs are always a challenge and a force to be reckoned with. They have a great staff over there. They’ve had one for years and years, going back to Coach (Larry) Neumann and now Coach (Monte) Barrow.”

Hickman likes the skill players the Bulldogs have, as well.

“They have a transfer kid at quarterback (Adam Tosclair) that can really throw it. He’s tall and rangy and can really rifle it back there,” said Hickman. “Their running backs are good and they have some nice receivers. It’s a good offense to see. They like to spread you out. We’ll see that offense the first two weeks. We’ll see that same style when we play LC-M the next week.”

Hickman feels the Mustangs were sharp in their scrimmages.

“Defensively, we looked like the same old Mustangs, flying to the football and making big stops. We have to continue that Friday,” said Hickman. “Offensively, we opened it up more last week, completing a few deep passes. We’ll have all three of our backs healthy again this week in Jamal Shaw, Jailen Brown and Raymond Mallett. What I was pleased with the most, especially in the second scrimmage against Vidor, was our conditioning. I think we could have played two more quarters with no problems.”