New Bulldogs quarterback Adam Trosclair ready for Mustangs. “It has been a long time coming.” 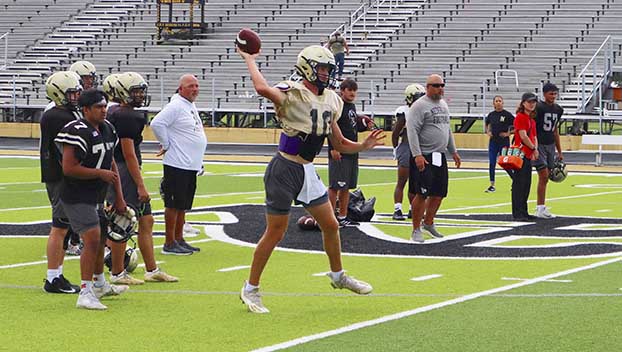 NEDERLAND — A young Bulldogs team enters the next phase of its evaluation as Nederland prepares to take on West Orange-Stark Friday.

The game kicks off at 7:30 p.m. at Dan R. Hooks Stadium. Those not able to make the trip can watch live at the Sheffield Productions Youtube page for no cost.

For quarterback Adam Trosclair, it will be his first time taking snaps as the Nederland quarterback after transferring to the school in January.

“We have had a lot of preparation over the summer,” Trosclair said. “The o-line has been working. Me and the receivers have been on the field running a lot of routes. I feel pretty confident. I’m pretty excited. I’m pretty hype. I am ready. It has been a long time coming.”

While Friday’s game will count for the teams’ win-loss record, it will not have an impact on playoff seeding. Nederland Head Coach Monte Barrow said his staff is evaluating positions to find the right mix before district play starts in about a month.

“With these three non-district games, there is a lot we want to know from a personnel standpoint,” Barrow said. “We are going to learn a lot about our team before we hit district. That is a big thing for us. Hopefully they understand that.”

The Mustangs have a new head coach for the first time in 10 years after Cornel Thompson retired in December. Hiawatha Hickman took over the program, and Barrow said he expects WOS to maintain excellence. One difference will be the defense the Mustangs run.

“The things that don’t change is the mentality of the kids and they have tough kids that play the game physically,” Barrow said of WOS. “They play fast. Those are all of things that will help us going forward, and I don’t think that will change at WOS.”

Trosclair said he has had to work quickly to get on the same page as the receivers and build chemistry.

“We have to work together and understand what everyone is doing,” he said. “I feel like we are doing a great job of that. The timing is there. It was a little rocky at first. The routes were a little new to me. It is almost second nature now. We are coming in and we are going to be good.”