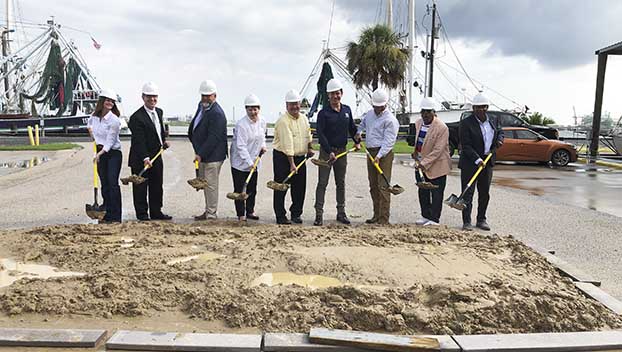 “There are a lot of people who have put in a lot of work through the last several years to make these projects a reality,” said Jefferson County Judge Jeff Branick. “It’s always with a grateful heart that I show up to celebrate the projects that have actually started cutting dirt, and this one is a fantastic one.”

Branick served as the guest speaker for the event held at the Sabine Pass Port, where it was announced work soon would begin on restoring the Sabine Pass Boat Ramp and reconstructing parts of South 1st Avenue and Mechanic Street. 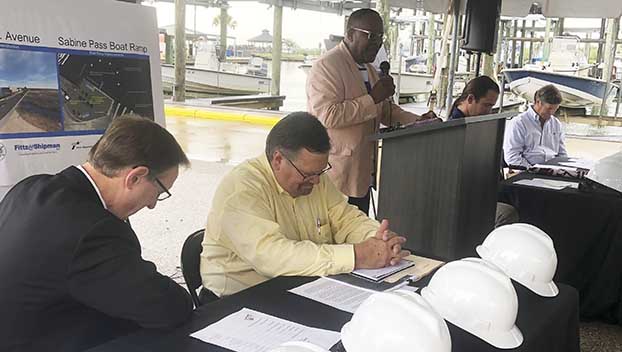 Repairs to the boat ramp, often called 4 Pier Boat Launch, have been in the works since 2019.

However, in July, it was discovered the cost of the project increased by almost $1 million due to inflation and materials.

Texas Parks and Wildlife secured a $1,264,692 grant through the Harvey Fisheries Grant, but the funds will expire in May, which escalated the need to find the additional funding.

Cheniere Energy pledged $125,000 to the project, and the City of Port Arthur authorized the additional expenses necessary to redo three boat ramps, rebuild the bulkhead, add a fish-cleaning table and install protective devices offshore that prevent commercial vehicles from damaging the ramps.

“It’s hard to believe this process with the boat ramp at least began four years ago,” said Carey Gelpi, ecosystem leader of the Texas Parks and Wildlife Sabine Lake Maritime Lab. “It’s been a long and winding road. But I am overjoyed that we have arrived at this day when we can celebrate the official groundbreaking of such an important project.”

Gelpi said between 1991 and 2021, TPW conducted 12,868 interviews at the boat ramp to judge its level of usage. He said 184 counties from Texas were represented, as were people from other states and other countries.

Locally, 58 percent of those interviewed were from Jefferson County and 13 percent were from Orange County.

“That boat ramp is so important to many people in this area,” Gelpi said. “The Sabine Pass Boat Ramp…is the most crucial access point to the Gulf of Mexico for area residents and for folks visiting the Sabine Lake area.”

Branick expressed his appreciation to all involved parties for getting the project to its current stage.

“It’s something I’m appreciative of, not only because I’m a fisherman, but because all the fishermen in the area were wearing me out on Facebook wanting that project done,” he joked. 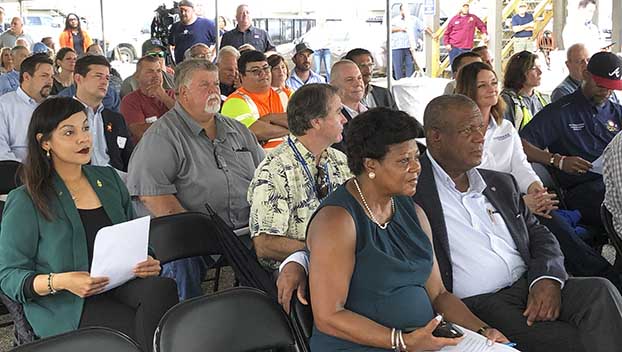 The Texas Department of Transportation will be providing 75 percent of necessary funding to reconstruct South 1st Avenue From Granger Pass to the entrance of the Sabine Pass Port, according to information from Port Director Mark Viator. The project, estimated to be complete by January, will cost more than $877,000.

Also, at an estimated cost of $2,374,626, Mechanic Street will be widened and paved with concrete, allowing for better access to the port through its continued expansion.

“I don’t know how many of you in the audience saw us five or six years ago, but we’ve come a long way,” said Past Port Director Mic Cowart of the Sabine Pass Port. “A lot of that has to do with the vision of our commissioners. They had a lot of forward thinking, and working with our community, was able to go out and secure capital bonds to enable us to do some construction projects.”

The City of Port Arthur is providing matching funds for the street repairs.

“It’s going to improve the transportation and infrastructure in this part of South County and open up this port to further development,” Branick said, “because I think because of all the economic and infrastructure expansions we’ve seen in the last few years and all of the ones we are going to see over the next 5-10 years, I see an opportunity for growth at both our ports and I’m excited about it.”