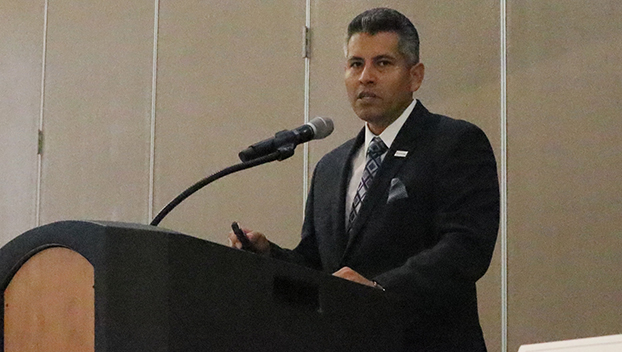 Viamontes talked about the current struggles many energy producers are facing as temperatures rise around the world.

“It is a sensitive topic,” he said. “Temperatures are up and bill costs are up. Our team is committed to stepping up… We realize customers are having difficulty paying their bills. That is not just low-income, but middle-income earners as well. We have had record-setting temperatures in the months of May, June and July and that causes more consumption.”

Viamontes said there has also been an increase in natural gas prices, which doubled over the last year. He also added recovery from recent storms impacted customers’ bills.

The president said Entergy is well positioned because it is part of the MISO grid as opposed to the ERCOT grid, which serves the majority of Texas.

“When we are faced with any supply challenges, which includes severe weather events, we are able to pull from multiple resources from multiple parts of the country,” Viamontes said. “That includes 15 states and a province in Canada, as well. That allows us to provide service when customers need us the most.”

After Viamontes’ speech, Representative Dade Phelan made a quip in favor of Entergy.

“I used to get calls when I first got elected about why we were not with ERCOT and part of the Texas grid,” he said. “I don’t get those calls anymore, to be honest with you. People want competition and I tell them they need to go look at ERCOT and what the billing looks like. The competition looks great until you get that bill in the summer for several thousand dollars.”

Viamontes said Entergy will keep up with the growth of the industries of the region.

“We are seeing an extreme amount of industrial expansion in this region, which is exciting,” he said. “With that, we have an obligation to grow in a way that is affordable, reliable and sustainable. We have been able to invest $2.3 billion in the last four years and are looking to invest another $2.5 billion in the next three years.”

“It is our state-of-the-art modern, efficient combustion turbine technology,” he said. “It is fully dispatchable, which ensures affordable, reliable and sustainable. It is designed to use not only natural gas but also hydrogen. That is something our industrial customers are keenly interested in, not only for dispatchable energy for 24/7 reliability, but also as a path to decarbonization with a low-emissions aspect.”

Viamontes said the project would use hydrogen and will eventually replace aging resources, such as the Sabine plant, which is about 60 years old. The new project is projected to create $1.8 billion in economic impact and create 7,000 jobs in the region.

Hydrogen is a key alternative as the state already has infrastructure with 1,600 miles of pipeline along the coast. The state also recently passed House Bill 1510, which directed the public utility commission of Texas to consider dual-fueled capability generation, which the Orange County plant is capable to operate.

Viamontes said the recent Inflation Reduction Act also has incentives for hydrogen use.

Entergy also plans to further diversify its energy sources by building the Umbriel Solar Project in Polk County, which will have 150 megawatts of solar panels. The company is also in negotiations for about 400 mw of solar panels in Southeast Texas. The Polk County project is slated to be in operation by the first quarter of 2024 with the proposal for the latter project set to open in 2025.

The company is also on the forefront of reducing carbon emissions and is five years ahead of schedule on a plan to bring the company to 50 percent emissions by 2030. Entergy expects to reach that goal by 2025 with the goal to be at net zero by 2050.