Port Neches-Groves football returns to the field to open up the season against Memorial next week.

PNG returns 16 starters from last year’s roster that went three rounds deep into the 5A Division II playoffs. The offensive line is believed to be one of the team’s strengths with five returning starters. 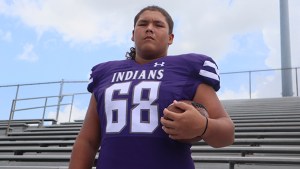 Elizardo Pena was named the Athlete of the Week. (Chris Moore/The News)

Elizardo Pena, who plays guard for PNG, is one of the many seniors on this year’s roster.

The unit will get a good test in Week 1 against Memorial’s front seven, which is traditionally strong.

Pena recently represented PNG on the cover of the Port Arthur News 2022 football preview, which was released Wednesday with the newspaper. It can also be viewed at panews.com.