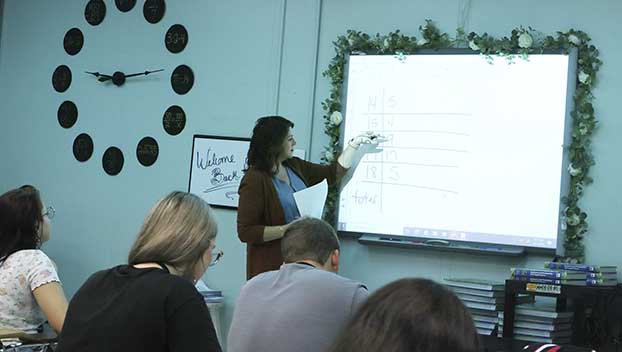 Ashley Rhodes goes over math problems on the first day of the 2022-23 school year at Nederland High. (Chris Moore/The News)

The superintendent mentioned teachers, administrators and paraprofessionals, then made special note about the sometimes forgotten bus drivers, cafeteria workers and custodians.

The roll call was done in celebration and response of recently released A-F accountability ratings from the Texas Education Agency — a first since 2019.

NISD was awarded an “A,” joining Bob Hope School as the only other Port Arthur or Mid County district to achieve the lofty standard.

Nederland ISD received an “A” overall, obtaining a score of 90/100 for a district with 4,995 students. The district earned an “A” in school progress and academic growth, and a “B” in relative performance.

“It’s a team effort,” Kieschnick said. “Our team came together last year coming out of COVID, got our first actual accountability ratings and to be an ‘A’ district is phenomenal. I just want to say a big ‘thank you’ to this (school) board and every single NISD employee. I would like to say, ‘job well done.’”

School Board President Micah Mosley told Port Arthur Newsmedia it is awesome to be part of a passionate team, likening his own contribution as a mere .01 percent impact of a greater team accomplishment.

“You go through the list, and the team we have at Nederland has amazing work ethic and cares so much,” he said. “These people are so passionate about their jobs and the differences they make in kids’ lives through education and, ultimately improving their outcome for when they leave us at NISD. It is a testament to all the hard work that they put in.”

According to Mosley, a special component to the district’s success is a high degree of parent and guardian involvement.

He said parents make their presence known in PTA meetings and through volunteer efforts with school programs and festivities.

A staff that goes above and beyond the workday hours helping students is another strong point, Mosley said.

He reflected on the efforts of his wife, a teacher, and family members, which include many educators, as examples he knows represent the complete faculty’s performance.