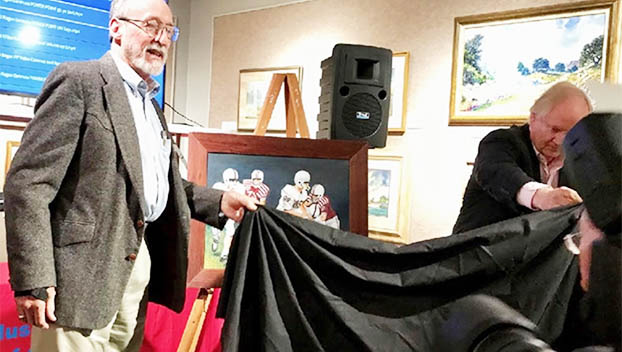 Ragan Gennusa, left, and Tom Neal unveil a Gennusa work at his induction into the Museum of the Gulf Coast’s Hall of Fame for Notable People. (Ken Stickney/The News )

This post is the second in a two-part series that reveals the high schools that have produced the most Texas Longhorn football lettermen in that program’s history, from its beginning in 1893 through the 2021 season.

To recap, these rankings were compiled as part of a research project that I began in December of 2020, and are based on the number of recognized lettermen that have attended each high school.

(EDITOR’S NOTE: This story was originally written by Jonathan Wells and published by burntorangenation.com and has been republished with permission from the site.)

This will not include every recruit Texas ever signed or every player who was ever a member of the Longhorns team if they did not win a letter with the program.

Thomas Jefferson High School of Port Arthur came in at No. 2 on the list.

The Yellow Jackets were a football team to be reckoned with in Southeast Texas for many years, and they reached the state semifinal round of the playoffs at least once in every decade from the 1920s through the 1980s.

The Yellow Jackets reached a state championship game five times in their school’s history, winning a co-championship after tying Breckenridge in the 1929 title game, and winning the 1944 state final outright over Highland Park.

Both of the school’s state titles were won by teams coached by Tom Dennis, a former Longhorns tackle who was the 1921 team captain.

The book closed in 2002 when the school merged with Port Arthur’s two other high schools (Austin and Lincoln) to form Memorial High School.

In keeping with the theme of ex-Longhorns coaching Port Arthur teams, Port Arthur Memorial’s head football coach from 2009 to 2017 was Kenny Harrison, who played running back at UT in the mid-1990s and was the last Jefferson alum to win a letter with the Longhorns.

Carl Larpenter (1956) won his only letter at Texas as a sophomore playing offensive and defensive tackle in 1956. He dropped out of school in early 1957 after becoming academically ineligible, then served in the military for a few years. He reportedly intended to return to school and try out for a spot on the Longhorn squad in 1959, but he did not suit up for UT or any other college again.

In 1960, after being away from football for over three years, Larpenter was signed by the Denver Broncos, a brand new franchise that was then preparing to play in the inaugural season of the American Football League (AFL). Larpenter was a member of the first two Broncos teams (1960-61) and started a total of 12 games at tackle and guard, then was traded to the Dallas Texans in the spring of 1962.

Larpenter’s Pro Football Reference page says he played in two games with the Texans that season, but contemporary news accounts say he was cut three days before the team’s first game in a move to help trim the roster down to the AFL’s 33-player(!) limit. Larpenter never played pro football again, and the Texans franchise relocated to Kansas City the following year and became the Chiefs.

Ragan Gennusa (1966-67) went from being buried on the depth chart at quarterback at the beginning of his Longhorns career, to becoming a starter at split end, and he was UT’s leading receiver in the 1966 and 1967 seasons. He was an acclaimed artist in his post-college years, known primarily for his paintings of western scenes and wildlife.

Cotton Speyrer (1968-70) was UT’s leading receiver in its first two seasons running the wishbone offense (1968-69). As a junior on the Longhorns’ 1969 national championship team he caught 30 passes for 492 yards in the regular season, then had another four catches for 70 yards in UT’s 21-17 win over Notre Dame in the Cotton Bowl.

He was awarded All-America honors after the 1969 season by the Central Press Association (first team), United Press International (second team), and Walter Camp Football Foundation. In the third game of the 1970 season, Speyrer helped extend the Longhorns’ winning streak to 23 games when he caught a 45-yard go-ahead touchdown pass with just 12 seconds left in regulation to give Texas a 20-17 win over 13th-ranked UCLA.

He suffered a broken arm the following week in a 41-9 win over Oklahoma, and was lost for the rest of the season, one which would end with a previously undefeated Longhorns falling to Notre Dame by a 24-11 score in a Cotton Bowl re-match. Despite only playing in four games during his senior year, Speyrer was named a Walter Camp All-American for 1970. He was picked in the 2nd round of the 1971 NFL Draft and played in the league for four seasons.

Bruce Hebert (1972-74) was a starting offensive guard for the Longhorns for three seasons, despite a listed height of just 5’11” and a weight under 220 pounds. He was not significantly bigger than some of the running backs he blocked for, but was a very highly-regarded player and made the All-SWC second team as a junior and first team as a senior.

Billy Gordon (1974-76) was the starting center on Darrell Royal’s last two Longhorns teams. As a junior in 1975 he was named to the UPI’s All-SWC first team, and was a second team pick by the AP. He became the first and only Port Arthur Jefferson alum to serve as a Longhorns team captain as a senior in 1976, and for his work in that season he was named to the All-SWC second team by both the AP and UPI.

Todd Dodge (1982-85) was the star quarterback of the last Port Arthur Jefferson team to reach a state championship game. He led the Yellow Jackets to the 1980 state final against Odessa Permian, which they lost 28-19. He graduated from Jefferson in 1981 as the owner of the state’s high school record for career passing yards with 5,693, and his 3,123 passing yards in the 1980 season was also a state record at the time. He was a four-year letterman at UT during a period when the program was not known for its stability at the QB position from year to year. Dodge was the team’s starting QB in the 1984 season, and he also appeared in 27 games over his other three seasons.

He went on to much greater success as a high school coach, particularly during his time at Southlake Carroll (2000-06) and Austin Westlake (2014-21). He was a head coach for 23 total seasons at six high schools, which were sandwiched around a four-year run as head coach at the University of North Texas from 2007 to 2010. His teams won seven state championships in all, four at Carroll and three at Westlake. He retired after the 2021 season, but not before his Westlake team won its third straight state title and extended its winning streak to 40 games. Dodge is one of only two head coaches in Texas history to have multiple 40-game winning streaks (the other is Carthage’s Scott Surratt), and he is the only one to have such a streak at different schools.