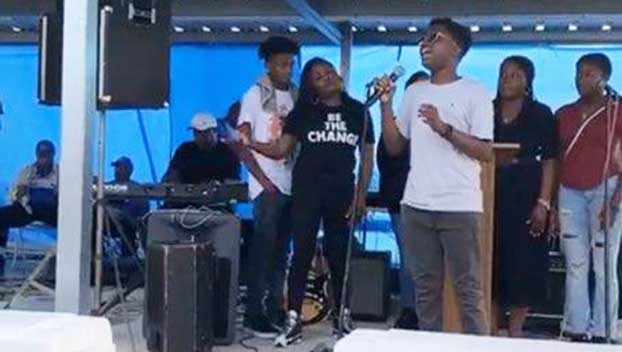 A community event that drew a crowd of approximately 150 people started with a thought years before.

“It was a vision,” said Beatrice Sanders, who organized the Montrose Community Gospel Fest that took place in Port Acres this past Saturday. “This year I thought about it so hard, so I talked to my brother and asked if I could have it on his property. He said, ‘if you can get it together.’”

The land was a place Sanders’ family would often have birthdays, baby showers and other events that would bring the community together. With that in mind, she went to work organizing a day of praise and worship.

“It went great,” she said. “We didn’t have as large a crowd as I expected because of the rain, but we had about 150 show up. All the groups there did a wonderful job. We had plenty of food.”

And it’s events like that, said District 4 Councilman Kenneth Marks, that make the area stronger.

“Small communities get together and show they’re proud of their communities, and we want them to thrive,” he said. “We really need more people like Ms. Sanders and her group to move us forward. I’m willing to help in any way I can through my position as a council member and through the council as a whole.”

Marks asked Mayor Thurman Bartie to issue a proclamation declaring Aug. 13 as Montrose Day. And Sanders said, even if the first gospel fest is the last, she’d like to commemorate the day each year.

“We might do it annually if I can find someone younger to spearhead it,” she said. “Or we may not have one as large as we had, but maybe a community picnic, possibly with some entertainment.”

Sanders, Marks said, worked with community members and the City of Port Arthur to organize the event.

“Ms. Sanders did an excellent job at putting that thing together and working with several different groups and organizations along with the city,” he said. “It was a tremendous effort on her part.”

Justice of the Peace Tom Gillam III was the inspirational speaker.

“He talked about family,” Sanders said. “It was really emotional. We all had a great time praising God together. I’m so glad people had faith and stuck in there, even though it rained.”