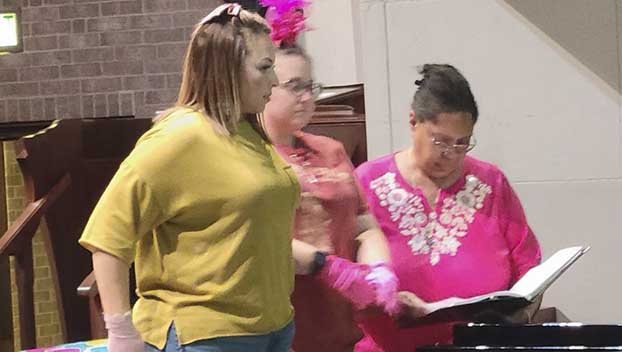 From left: Lydia Seay, Hannah Gray and Cecelia Chaisson will perform in the cast of ‘Into the Woods’ Saturday. (Courtesy photo)

A high school dream, an ensemble of local experts and a fairy tale performance meet together to provide children in Jefferson, Orange and Hardin counties with beds.

“It was just the craziest thing,” said Renee Kloes, who was a choir director at Nederland High School for more than 20 years before retiring two years ago. “I’ve kept in touch with former students, and one called during the COVID shutdown. She said Stephen Sondheim had died and I’d always promised we’d do ‘Into the Woods.’ It’s just way too hard for high school seniors. But I talked with her before Christmas and she said, ‘now is the time.’”

Sondheim, who died in 2021, wrote the music and lyrics for the Broadway play.

Meanwhile, as she contemplated a way to make the production possible, Kloes spoke with a member of her church, who in 2019 created a local chapter of a national non-profit that builds beds for children who don’t have one of their own.

“The statistics are that 2-3 percent of the population of kids 3-17 don’t have a bed of their own,” said Jack Seeley, who, with his wife in 2019, created the local chapter of Sleep in Heavenly Peace. “That definition is sleeping on the floor, sleeping with a sibling or adult, or sleeping on a chair or couch. If you do the math, the populations of Orange, Jefferson and Hardin counties, there are some 8,000 kids in those three counties that don’t have a bed.” 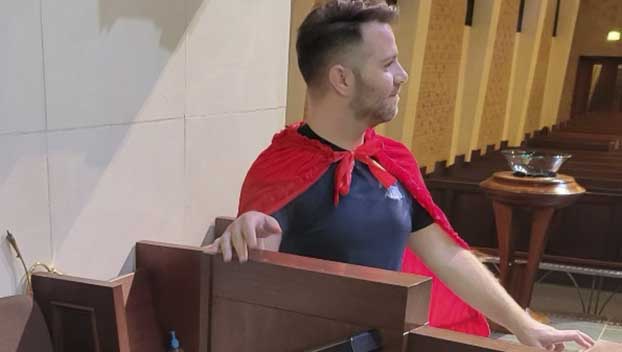 “I thought surely we can do that,” Kloes said. “I started calling some performers I knew because Stephen Sondheim songs are very difficult.”

The cast of the Saturday show now contains performers from Southeast Texas that have shared their talents across the country.

“We’re fortunate that our cast is multitalented,” Kloes said. “Some of them have been singing professionally. One of our members was working on Broadway and when it shut down for COVID he moved back to Texas.”

Other members include an opera singer who previously performed on the east coast, a longtime Port Neches-Groves choir director and well-known members of the local community theater groups. Many of the performers are Kloes’ former students, and some are current students from NHS. In addition, several members from the Symphony of Southeast Texas volunteered their talents.

“We’re calling ourselves a group of musicians and actors that want to help a great organization and bring beautiful music to the area,” Kloes said. “It’s just so amazing. The whole show has gorgeous movement, but there’s also a lot of comedy, a lot of humor.”

With only six rehearsals, the group is ready to perform the fundraiser Saturday at First United Methodist Church, 701 Calder Avenue in Beaumont. There will be one show at 2 p.m. and one at 7 p.m. Admission free, but they will be accepting donations for Sleep in Heavenly Peace.

“(Seeley) got so excited, we have a bed up on the stage that we just put there Thursday,” Kloes said.

Seeley said since its inception, the local chapter of Sleep in Heavenly Peace has delivered 1,676 beds. This weekend they will be sending out 45 more.

“We have to raise our own funds,” he said. “People can either donate money or in kind gifts, which are typically bed clothes. We just love beds in a bag.”

The beds are delivered dressed and ready.

With 288 people on the waiting list, the organization is not currently taking applications. However, Seeley said, they are in need of volunteers to help build and deliver. A delivery team is two people and a truck or large SUV.

The next build day is Sept. 10 at 2950 Milam Street in Beaumont from 8:30 a.m. until noon. Children are welcome to participate; however children 12 and older must have one adult per five, while children under 12 need one adult per child.