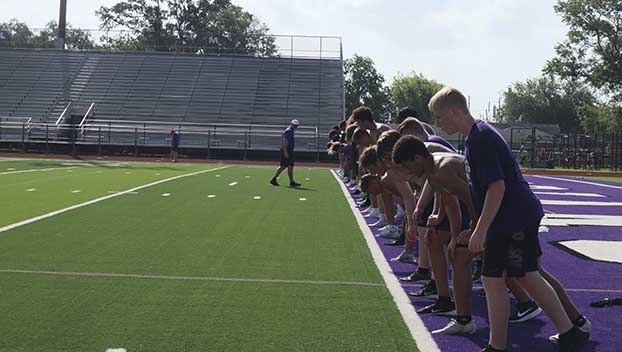 PORT NECHES — The Port Neches-Groves football team is suiting up against an opponent for the first time in the Jeff Joseph era.

The Thursday scrimmage against Little Cypress-Mauriceville will not officially count on PNG’s record but will help the team prepare for next week’s matchup against Memorial.

“I haven’t seen (my team) play against anyone besides each other,” Joseph said. “It is a chance to evaluate and see who steps up and makes plays, see who handles pressure and see someone playing against us. Really, it is about how we are moving on offense, getting our play calls in and personnel stuff. That is what we are looking for.”

The scrimmage will not be full game simulation.

The coach said part of the scrimmage will be controlled and some will be a live-game format.

While most teams in the area were able to play two scrimmage games, PNG had to stick to one because the Indians used a padded inter-squad scrimmage in the spring, per UIL rules.

PNG also had to wait an extra week to put pads on for fall practices.

Joseph did not schedule the scrimmage, but is happy to be facing a quality team.

Quarterback Cole Crippen said can’t wait to line up against another team, go head-to-head and show the work his teammates have been putting in the last couple of months.

The quarterback also said he wants to see how the team deals with the fine details, adding he wants to excel where most teams struggle early on.

LCM is a formidable matchup despite being a 4A team. The Battlin’ Bears earned a 11-3 mark last season, advancing all the way to the Class 4A Region III Division I Finals. The team returns five starters on each side of the ball.

The PNG defense get its first test with Da’Marion Morris returning for LCM. Last season the running back recorded 1,811 yards and 22 touchdowns on the ground.

“We are going to see a lot of speed and talented players throughout the season,” Joseph said. “But in our first five games, we play a couple top-20 teams in the state. We have some really fast opponents. So going against someone of that caliber will really help us get ready for the first game.”

Crippen said he is looking forward to seeing how some of his teammates perform in their new positions and how well the team competes.

Joseph had some players switch sides of the ball in the spring and summer practices. The head coach said each position is still up for grabs and will continue to be evaluated through the scrimmage and non-district schedule.