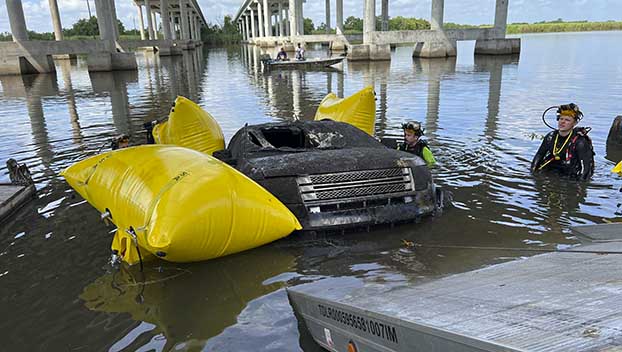 For the second time in a week, the Port Arthur Fire Department Dive Team recovered two vehicles from a nearby waterway.

According to Fire Chief Greg Benson, the latest search began after a fisherman called Sunday saying he believed he’d located a vehicle in Taylor’s Bayou while using his depth finder.

Engine 3 was sent to the scene to confirm what the man had found. Based on time and availability, Benson said, it was determined Monday would be best to send the Dive Team to retrieve the vehicle.

Captain Crystal Holmes with the Jefferson County Sheriff’s Department said the vehicle had been reported stolen in December 2021.

However while underwater, the Dive Team located a second vehicle.

“The vehicle had been there quite a long time,” Benson said. “The roof was missing.”

Holmes said there were no bodies found in either vehicle.

PAFD Captain Joshua Reswebber told Benson this has been one of the — if not the — busiest years for the Dive Team. 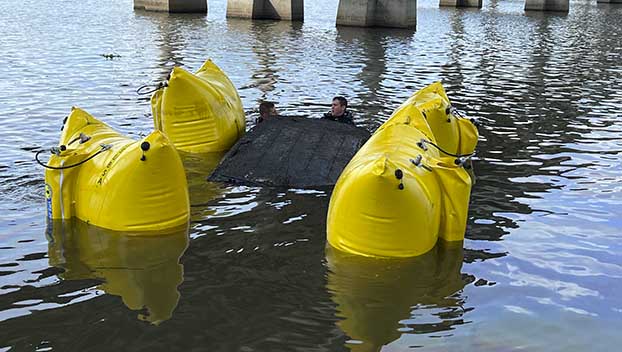 While searching for a vehicle in Taylor’s Bayou Monday, the PAFD Dive Team found a second vehicle. (Courtesy photo)

“We’re only three-quarters of the way through,” the fire chief said.

In addition to searches in Port Arthur, the department has provided mutual aid to nearby agencies and has performed approximately a dozen operations in 2022.

In early March, the City of Port Arthur authorized the purchase of a new Dive Rescue Vehicle to replace the department’s 1996 model. The older vehicle lacks heat and is unable to tow a boat behind it.

Benson said the new vehicle’s delivery has been stalled due to a delay in the supply chain, but is expected in the near future.

On Aug. 9, the Dive Team recovered the vehicle and body of Elton Dewayne Harris. The 43-year-old Port Arthur man had been reported missing after he was last seen July 24.

While recovering Harris’ vehicle in a canal on Texas 73 near Memorial Boulevard, the Dive Team also found a second vehicle believed to belong to a Port Neches man reported missing in 2008. The identity has yet to be officially confirmed.