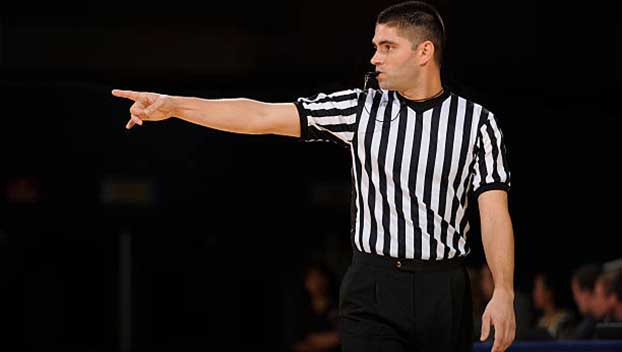 A basketball referee makes call during a game.

The Texas High School Basketball Officials Association is looking for people to referee basketball games for the upcoming season.

Since the start of the pandemic, the organization has seen a fall in the number of participants. Refs in the organization tend to be older, which was one of the high-risk groups for COVID-19.

The decline in participants, along with the lack of youth, has led to the dearth.

Area coaches are aware of the issue and are prepared to adjust, if needed.

“There are not a lot of young guys getting in the association,” Smith said. “We have had the same guys calling games since I played.”

Smith said the association sent out emails to coaches to encourage them to reach out to former players about possibly joining.

“It is a good side job and good income, especially while they are in college,” Smith said. “They are doing everything they can to push for that.”

THSBOA covers Southeast Texas as far north as Buna. The association’s business secretary Shannon McDonald said the group has approximately 100 refs, but that is well short of optimal operating capacity.

“We have more games than we have refs,” McDonald said.

The group officiates games for TAPPS, 2A, 3A, 4A and 5A schools in the area. They work middle school games, junior varsity and varsity games for girls and boys, while also doing some youth leagues, too.

Referees can make between $50-$75 per game, along with extra for gas for some games.

“It is a good way to stay in shape and meet new people and make some money,” McDonald said.

Those interested in learning more about becoming an official can do so by contacting McDonald by calling or texting 409-656-9831.

“As a chapter, we have waived local dues for first-year officials,” McDonald said. “All you are responsible for is state dues. They do a background check. Of course you need the shirt, pants, shoes and whistle. You can get started relatively cheap.”

The organization offers training, which starts at Kelly High School in Beaumont Sept. 6.

“We typically have six training sessions, and anyone that wants additional training, we will mentor them to get them up to speed,” McDonald said.

Smith said the job is tough.

“Early in my career, I was tough on the officials,” Smith said, laughing. “I had to change a lot. I was probably one of the reasons they don’t have as many now. My wife is always on me telling me to lay off the officials. They do the best they can and they have the fans and kids on them, but they are extremely important to what we do. We can’t have games without them.”