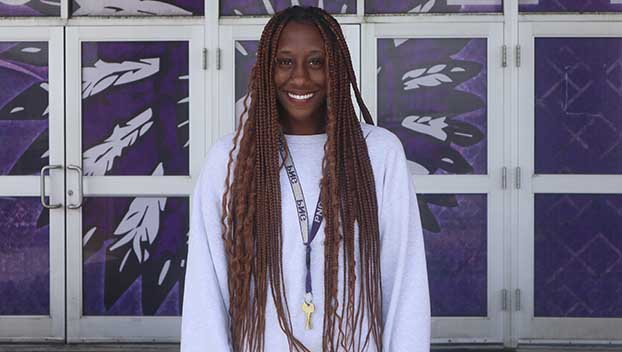 The Bre’Ala Box era started with a win for Port Neches-Groves volleyball.

PNG’s new head coach earned the first win of her career Tuesday with a 3-1 victory over West Brook.

“It felt great,” Box said. “There were a lot of PNG fans there. The fact we were away, the fans being there really carried the energy. The team had good energy. It felt good to win.”

As an athlete, Box has played in more than 1,000 games. Despite not actively participating in Tuesday night’s win, she felt the same feeling she felt in her playing days.

“I felt like I was about to play,” she said. “I was getting excited every time the girls got excited. It brought me back to a few moments in college and having that feeling of competing and having fun.”

Shaylyn Cobb played well in the season opener, Box said. Cobb made the varsity team as a freshman.

“She has fit the lineup well,” Box said. “…She had such a good presence on the court. I am excited to see how she progresses the rest of the season.”

Nederland also started the season with a 3-1 win over Huffman. Senior Audrey Johnson led the team with 10 kills, 10 digs and 23 assists.

Head Coach Allie Crommett said the win felt better because of the opponent.

The coach said Johnson played a well-rounded game and helped the Bulldogs get past a tall block.

“She never left the court,” Crommett said. “She made her presence felt, offensively. She had some big swings but she really just placed the ball smarter. They had a really big block and she was able to play off it. She got some kills, and defensively she picked up some digs. They had a pretty good lefty on the right side and she was able to read really well. She also set for us and was just successful in a lot of capacities.”

Both teams head into tournaments at the end of the week. Nederland heads to Pearland for the 44-team John Turner Classic.

“We don’t ever got to the Pearland tournament and look at wins and losses,” Crommett said. “It is really about if we can compete at a higher level with higher skilled volleyball players. We want to see if we can make adjustments and gain some ground on teams that have a higher volleyball level.”

PNG will make its way to Pasadena for tournament play.

“We are definitely going to be playing tougher teams,” Box said. “We focused on some things we need to work on.”