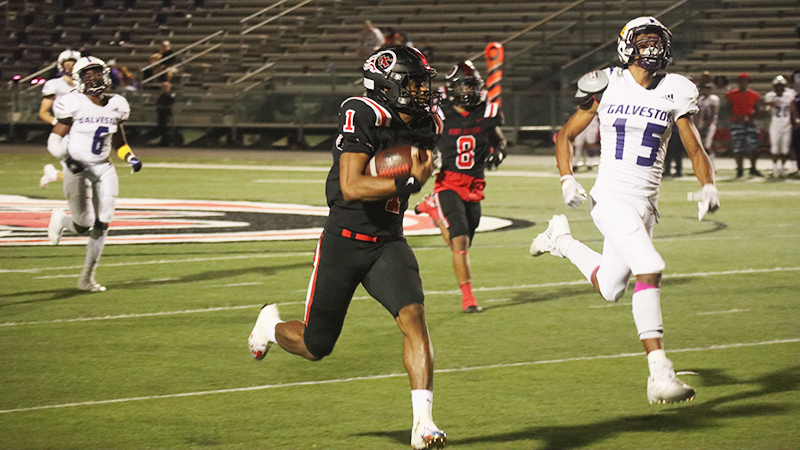 The now-former Titans star was one of the most electric players in the school’s history and cemented his legacy with two district MVPs, leading his team to the first undefeated regular season in school history.

It was not a surprise that Sanders received scholarship to play football at The University of New Mexico. In fact, it was more of a surprise that it took that long for him to receive a Division I offer.

Typically, true freshmen aren’t thought about when it comes to college teams.

But it seems that has already grabbed the attention of coaches and media that covers the Lobos.

During a media day, radio broadcaster Robert Portnoy asked UNM Head Coach Danny Gonzales about the chances of seeing Sanders on the field this year.

“He has been all over the place,” Gonzales said. “He’s been at slot receiver. We might bring him around and be the pitch guy on option stuff. How he acclimates to the speed of the game will determine how much he plays.”

The mere fact that media members are asking about Sanders is usually a good sign. Sanders is one of six quarterbacks on the Lobos roster and is not likely to start at the position, but the coach seemed to leave the door open to having Sanders line up on the field elsewhere.

Memorial Head Coach Brian Morgan said Sanders was in town last week before training camp started. Morgan added he is not at all surprised that his former playmaker is turning heads.

“I don’t know there program, but you have to think, going into it, he is one of the most explosive players on offense as soon as he walks on campus,” Morgan said of his former quarterback. “People are going to know who he is. There are a lot of different ways they can get him the ball. He can return kicks. They can hand it off or throw it to him. He does a lot really, really well. His speed will help him adapt to the college game. We talk about it a lot, but he is super intelligent. That aspect alone will help him.”

During his time at Memorial, Sanders was always the most dynamic playmaker on the field on any given Friday night. Coaches often talked about how the team had better passers on the roster but added it would be foolish to not put the ball in Sanders’ hands on every play. And it worked. With Sanders at quarterback, the Titans put up a record of 17-4 (including playoffs) over the past two seasons.

It is uncertain to what extent he will be involved in the Lobos offense this year, but this likely isn’t the last time we will hear his name.

Chris Moore is the Port Arthur Newsmedia sports editor. He can be reached at chirs.moore@panews.com.