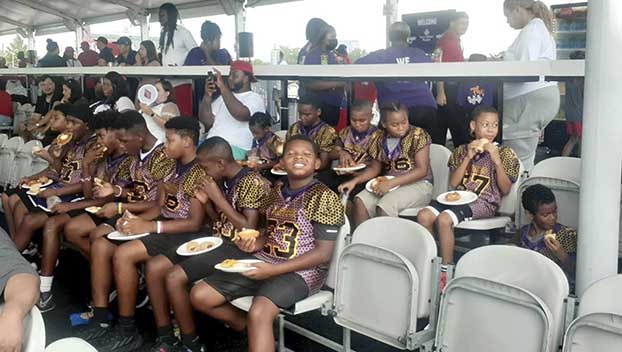 Members of the Port Arthur Junior Bees team sit in the VIP section of the Texans training camp. (Courtesy Photo)

The Port Arthur Junior Bees and Honey Bees had an eventful few days.

The youth football and dance team traveled to Houston to watch the Texans training camp. On Monday the team thanked J.K. Chevrolet for their contributions over the years.

“It went very well,” he said. “It was our fourth year going. When we arrived, we were escorted to the VIP tent, where the kids could relax and get a little drink and some food. They were able to watch the players do drills. It was very nice.”

The teams have been to numerous camps over the years. Coleman said he wants the youth league to be about experiences more than it is about football.

On Monday morning, Coleman and several players showed up at JK Chevrolet to thank the company for sponsoring the league for many years.

“We wanted to thank Mr. Turner,” Coleman said. “In the past, we have given him a Nick Saban-autographed football. I work the Nick Saban camp. We wanted to tell Mr. Turner ‘thank you’ for helping us get helmets, jerseys and shoulder pads. The girls go to Disney World Nationals. That helps because it cost a lot to go to Disney. We usually stay about four days, and that is about $8,000. The dance team has won championships the last nine years and been to Disney the last seven.”

Coleman said Port Iron has also helped the league out a lot over the past several years.

The league is gearing up for another season but is still in need of participants. The organization has a flag team, 8U, 10U and 12U. Coleman said the league needs approximately 15 more players in each division. The fee to participate is $65.

“We try to keep our fee low so kids and parents can afford to come in,” he said. “It is more than little league. We want them to be able to go places. We have two events coming up. We partnered with Gulf Coast Pop Warner and Lamar University. We are working on going to a Lamar game in September. We also might be going back to Houston to see one of their games. We are working on that.”