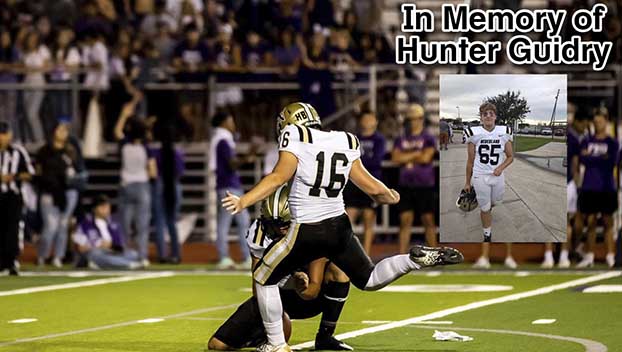 Carter Piletere kicks a ball during a game. (Courtesy photo)

NEDERLAND — Nederland Bulldogs varsity kicker Carter Piletere is aiming for the goalposts to raise money for cancer patients this season.

Piletere launched a Kick It with Carter fundraiser where people pledge a dollar amount for each point he makes kicking or they can make a donation.

Piletere is raising money to help those with cancer after watching best friend Hunter Guidry battle an aggressive form of brain cancer called glioblastoma in the middle of the 2021 football season. Guidry died Sept. 22.

“It’s heartbreaking to watch your best friend go through what he went through,” Piletere said. “When people have cancer, they always need money for medical bills and certain needs. I want to raise money for people so they have it beforehand instead of wanting it later.” 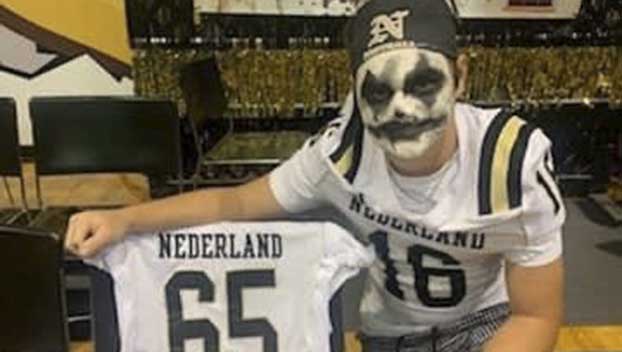 For example, a person can pledge $2 for every point Piletere scores. If he scores eight points, then the donation would be $16.

Sponsorships for businesses are available. In turn, the business logo and name is put on the fundraiser page.

Piletere’s mother, Carrie Hackbarth, is proud of her son and what he is doing in Guidry’s name.

“He has had a very hard year without Hunter,” she said. “It makes me happy to see him use the pain he’s going through and turn it into a purpose.”

Hackbarth appreciates all of the support and donations they have already received.

Guidry’s family, she said, thinks the fundraiser is awesome and “Hunter would be proud.”

Carter Piletere is a senior at Nederland High School and has been playing football since the seventh grade. Over the years he’s worked hard at kicking.

He said his life is pretty simple; he plays football and hangs out with friends.

He is a member of TNT, the acronym for Terrific Nederland Teens.

TNT members also visit younger students and educate them on the dangers of drug and alcohol use, he added.

As for the future, he’s like to play college football but has not picked a major, he said.

To donate or become a sponsor, go to the “Carter Piletere” Facebook page and follow the links.