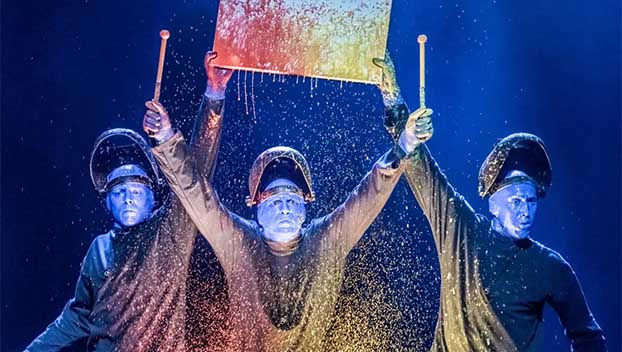 Pictured is paint drumming by Blue Man Group, which will be in Southeast Texas October 30. (Courtesy photo)

ORANGE — The Lutcher Theater is preparing to kick-off its new season, beginning Oct. 22 with a tribute to Aretha Franklin.

“The Lutcher Theater is a presenter, and what that means is we present these professional Broadway touring shows,” said JT Robertson, marketing/public relations associate for the Lutcher. “We don’t produce anything in house. So what you see at the Lutcher is the same thing you would see in the larger cities as part of the Broadway touring series.”

Robertson spoke in Port Arthur this week about the 1,500-seat theater and the upcoming shows, which include Blue Man Group, My Fair Lady and the Simon and Garfunkel Story, to name a few.

“We’re the largest Broadway presenter between New Orleans and Houston, and she is definitely a gem of our community,” Robertson said. 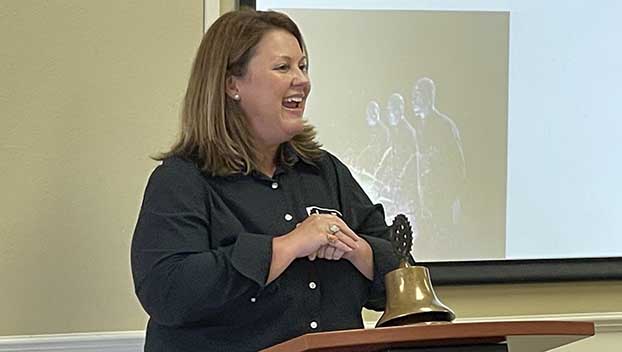 The Lutcher Theater opened in 1980 with a sold-out performance by Liberace. Since then, other performers such as Vince Gill, Clint Black and Willie Nelson have graced the stage.

“We had people coming in from all over the state,” Robertson said. “We were her only show in the whole state of Texas.”

Since opening in 1980, the theater has seen more than 1 million visitors.

“But in 2019 we did an economic impact study, and what we learned from that study is that the Lutcher Theater pumps $5.6 million into Orange County’s and Jefferson County’s economy,” Robertson said. “And we also support 21 direct and indirect jobs.”

Theater salaries and building maintenance is funded through the Nelda C. and H.J. Lutcher Stark Foundation, which was established in 1961.

According to information from the Foundation, the intent was to exclusively fund charitable and educational purposes and to “enrich the quality of life in Southeast Texas by providing and promoting opportunities for the study and enjoyment” of history, nature and the arts.

In addition to the Broadway shows and concerts brought each season to Orange, the theater also hosts a daytime series for children. Through funding from the Stark Foundation, the Lutcher is able to price tickets for children’s events at about $5.

“These are the same shows that tour in Houston, and they have to sell their tickets for about $35, so that’s a big plus for our students to give them this experience at a reduced cost,” Robertson said.

Season Spotlight Packages, which allow entry to four or more shows, are currently on sale.

“The advantage of purchasing a Season Spotlight Package is the choice of four or more shows, access to the best available seating before single show tickets go on sale, discounted handling fees and first access to additional special events throughout the season,” said Lutcher Theater Managing Director Lynae Sanford.

Individual tickets will go on sale Aug. 15 and can be purchased at lutcher.org.