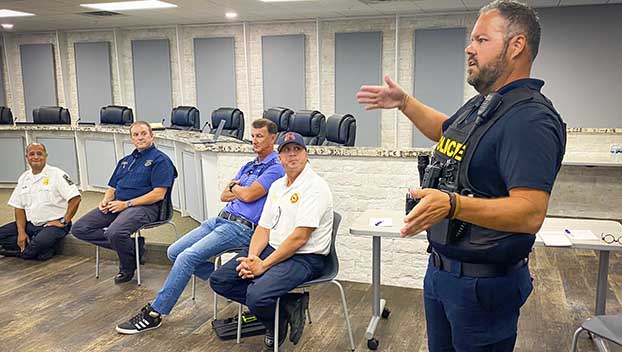 PORT NECHES — Leaders with Port Neches-Groves Independent School District have a team ready that is tasked with the safety and security of the schools.

Team members include veteran law enforcement officers and others.

“The school district is always looking at ways to keep our buildings secure, and we have an incredible working relationship with Port Neches police and fire and Groves police and fire,” Deputy Superintendent Julie Gauthier said.

Gauthier said this is a very structured plan, but it is not new.

“We’ve always taken security very seriously at PNGISD,” she said, adding they are thrilled with the team.

Clint Nichols is a tie that binds the team. He schedules the off-duty officers who work with the middle schools in Groves and Port Neches, is the school resource officer at Port Neches-Groves High School and works with the two school marshals, among other duties.

School security has been a topic of discussion in terms of school shootings and the tragedy in Uvalde.

“A tragic event like that makes you sit back and think, what can we do better train, how can we help out staff at school and the district and keep them educated and informed on what’s going on?” Nichols said.

Gauthier and Nichols are pleased to have Hebert on the team.

He recently returned from an 80-hour school marshal training course. The veteran officer called the training grueling and one of the most challenging things he’s ever been through.

Training was held at Texas A&M University. There were 10-hour days on the shooting range, full days of classroom training and more.

According to the Texas Commission on Law Enforcement, HB 1009 was passed by the 83rd legislature allowing public school districts and open enrollment charter schools to appoint school marshals.

Hebert said during the last two days of the training participants were shooting simulated ammunition, and they were put in dozens of scenarios including engaging a shooter with certain criteria.

In the class that Hebert was in, there was a former Drug Enforcement Administration agent, several former military people, several former police officers and some teachers and administrators.

It was after the school shooting in Uvalde and his retirement from PAPD that Hebert got the call from PNGISD.

“It’s like God touched me on the shoulder and said this is what you’re going to do. There was no hesitation to accept the job. That’s how Uvalde affected me,” Hebert said. “I’m excited to get in the schools and meet the teachers and kids.”