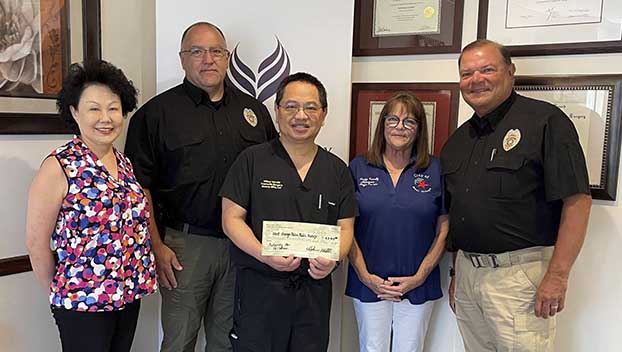 WEST ORANGE — West Orange Police are getting new tools to add to their crime fighting collection, courtesy of a donation from two local medical professionals.

Doctors Wilbur Hah and Marian Chen-Hah presented the WOPD with a donation of $4,540 to support the Orange Regional Tactical Response Team earlier this month.

The donation is going toward the purchase of “blue guns,” which are used in force-on-force training, Assistant Chief Jessie Romero said.

A blue gun is similar to a simulation gun and does not shoot lethal rounds.

Romero said this is a big help for the team.

Up until now, West Orange Police borrowed blue guns from the Beaumont Police Department to use in training situations.

Some of the tactical training is done in schools, but the response team has had training in a vast array of scenarios. They train once a month.

“This will provide a capability for real life force-on-force training,” Romero said.

Force-on-force training is scenario-based, and having the blue guns allows officers a chance to do more than point a fake weapon. Paintball-like projectiles are used, allowing for more realistic training.

The local doctors took to social media, saying after 26 years and in light of recent events, they wanted the local police department to have the best, most realistic training tools.

“We are happy to help with this equipment,” the post read. “It will allow the Orange Regional Tactical Response Team to run proactive tactical training scenarios on best ways to protect our most precious resource; our kids attending school.”