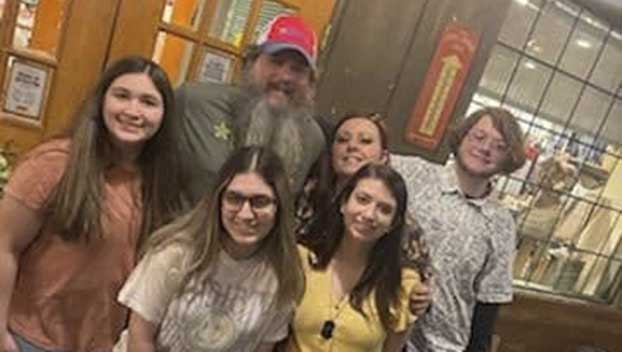 A Groves father of four is recovering after having brain surgery earlier this month.

Robert Garcia III of Groves has been in remission for stage IV melanoma that had spread to his brain for about a year. Scans in March came back clear, but in early July he started having problems with his speech. One night this month he woke up with seizures and the right side of his face was affected.

His family brought him to a local hospital, but due to his condition he was sent via medical helicopter to a Houston hospital and eventually ended up at St. Luke’s, where Robert’s physicians were.

He learned there was something on his brain in the same spot as the previous tumor that had been removed. Doctors were unsure if the spot was a tumor or damage caused by radiation treatments.

Robert underwent surgery July 14 and all went well, his family said. Doctors believe the mass is radiation damage similar to dead tissue and sent off biopsies.

He was sent home July 21 and is able to do outpatient rehab at this point. His wife Tara said he is tough and is pushing right on through. He has started physical and occupational therapy and has also begun Avastin immunotherapy treatments.

His cancer journey began in October 2020 and he had surgery to remove a tumor on his brain, as well as a subsequent surgery to remove tumors on his lymph nodes under his arm. He’s underwent radiation and immunotherapy treatments for his condition. He has a strong support system and much love from his family and friends.

Robert has been employed with the City of Groves for more than six years but is unable to work at this time.

As I wrote last year, I know Robert’s family from way back when, and I remember him and his siblings when they were kids.

Tara told me they are praying folks, so, if you care to, send a few prayers. If you’re not a praying person, send some good vibes to Robert and his family.