PNG volleyball camp is a success for new head coach 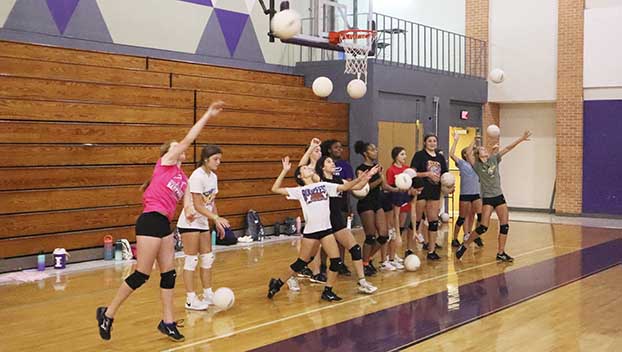 Girls participate in a game at the PNG volleyball camp this week. (Chris Moore/The News)

Nearly 200 kids filled up multiple gyms at Port Neches-Groves High School this week to participate in the summer volleyball camp.

Each gym had multiple coaches to ensure that each camp participant was able to receive quality coaching. Girls were going through drills to polish skills they will be using in just a few weeks.

For new head coach Bre’Ala Box, the camp was a way for her to get to know the community better. 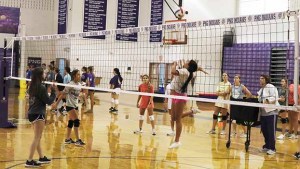 Preschool through third graders showed up for the morning session. Grades 4-6 came for the late morning session and the day was capped off with grades 7-9 meeting in the afternoon.

“Camp has been really fun,” Box said. “It ahs given me an opportunity to meet a lot of new people. My favorite part has been the younger ones and seeing how involved everyone is in the community.”

Box said it has been interesting to see how many of the girls participating in the camp have older sisters, cousins or other relatives that were a part of the program at some point.

“A lot of kids are coming here because they want to be like their older sibling,” Box said. “It really shows how the older group can inspire the younger girls.”

Box said she was told the camp had a larger turnout than recent years. After working on some drills to develop skills on Tuesday, Box had the ninth graders, which was the camp’s largest group, play some games to get the competitive juices flowing.

Each session worked on different skills because of the ages involved.

“With the youngest ones, they just played games,” Box said. “The older ones were kind of learning the basics. For the sixth, seventh and eighth graders, they learned a little more than the basics because they are older. The ninth graders are doing drills and getting the full workouts.”

Box said she looks forward to seeing how some of the younger girls develop over the years and is excited about the potential to see her program grow.

Box will soon make her head coaching debut for PNG. Her team is scheduled to have their first scrimmage against Little Cypress-Mauriceville Aug. 5 and will take on West Brook on the road Aug. 9.