Nederland man talks about being impaled in head by rebar – “If you love someone, tell them” 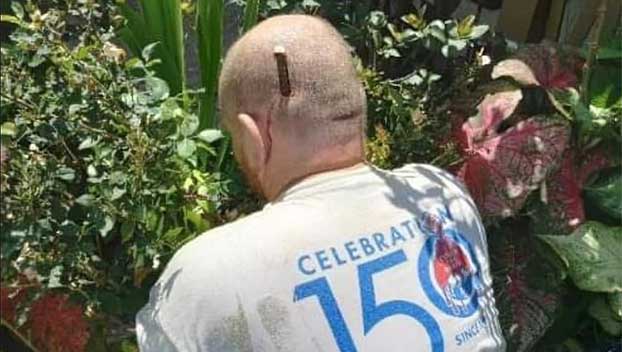 NEDERLAND — A local man who miraculously survived being impaled through the neck and head on a metal rod wants to remind others to show compassion and to tell others they love them.

On July 20, Michael Richards was on the first floor roof of a home in Nederland painting the soffit on the second floor when he slipped and fell into a flower garden. But when he tried to get up, he couldn’t. At first he thought his shirt was pinned to something.

A piece of rebar had entered under his jaw and exited the back of his skull.

A coworker asked him if he was OK, but when Richard tried to move and couldn’t, he asked the man to call 911. A man he knows as Mr. Tim took care of him until first responders arrived. 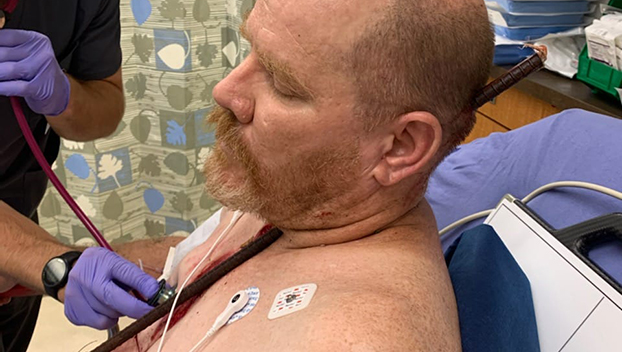 Telling people you love them

“If you love someone, tell them,” Richard said.

Before he was wheeled into emergency surgery, he was able to tell his wife and brother-in-law he loved them.

He added if someone needs help or lifting up, do it because you never know how long you have. Sometimes it’s just millimeters, referring to the fact that the rebar was millimeters from striking major organs.

“God has a purpose for me,” he said. “God’s the reason I’m still here today. That’s why I said if you love someone, tell them. If someone needs help, help them. Go the extra mile. Be of service to people around you.”

Someone used a pair of large bolt cutters to cut the rebar and free Richard from the metal rod and after that he was rushed to Christus St. Elizabeth Hospital in Beaumont.

Richard said he has a return visit planned to the trauma surgeon to remove the sutures, but as far as he knows he does not need rehabilitation.

Richard said his brother in law wants him to take off work as long as possible, but as of now, Richard is surviving off proceeds from an online fundraiser and the goodness of his brother-in-law, Lawson Loper.

The fundraiser can be found on GoFundMe.com by searching “If you love someone tell them.”

This wasn’t the only freak accident in his life. His wife’s mother was in a 4-wheeler wreck some years ago and was impaled in the neck by the handle of the ATV, he said.

“For my wife and brother-in-law to see this happen again, it’s probably traumatic for them,” he said.

Since the incident, Richard has gone through his phone and called “everyone” and told them he loves them.

“You don’t know what’s going to happen tomorrow,” he said. “When I was 14, my father went to work one morning and never made it home. He fell four floors to his death. When I was on the ground, I was thinking about my dad. He never made it home to tell them he loved them.”