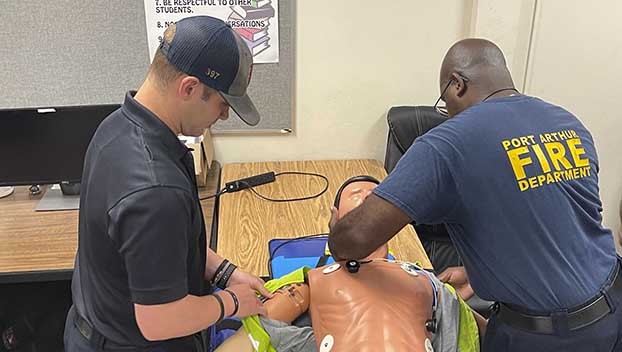 The Port Arthur Fire Department acquired a lifesaving device that can dramatically change the outcome during a cardiac event.

“The AutoPulse is an automated CPR device,” said Captain Ura Lara. “Basically, it does all the CPR, rather than the human having to do it. And it gives effective chest compressions compared to a human.”

The department has two machines and three batteries, each battery providing 30 minutes.

More than 70 percent of the department’s calls are medical in nature. Last year, PAFD responded to approximately 120 cardiac arrest calls that required CPR.

“They may have two in one day, and then they don’t have another for three weeks,” Benson said. “Unfortunately, it’s a fairly common thing.”

The two new machines, which were secured at approximately $20,000 each through funds provided by City Council, arrived this month. Department members have been training and will put the AutoPulse in service Aug. 1. 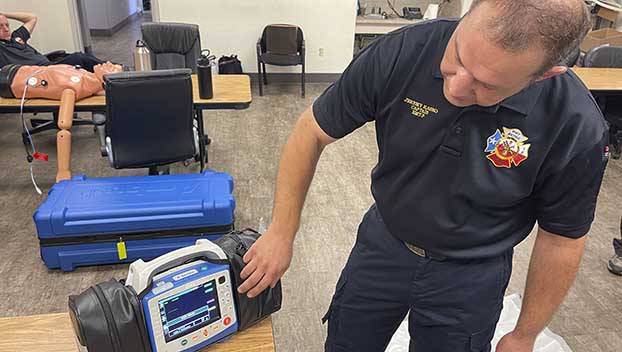 Capt. Jeremy Kasko demonstrates the Zoll monitor which prints reports for both physicians and the departments on stats from the AutoPulse, which can include times and types of medications. (Monique Batson/The News)

One will be located at Station 6 on 9th Avenue, and the other will be at Station 1 on Woodworth Boulevard.

“When you end up running a long scene and you’ve got the same two or three responders cycling out the compressions, it decreases that effectiveness,” said Capt. Jeremy Kasko. “This will continue to do compressions while the patient is seated up at a 90-degree angle, standing up on a backboard in an elevator — it’ll still continue to do those good compressions.”

And unlike similar machines that are piston-based, AutoPulse wraps around the body, minimizing sternum damage and the potential for broken ribs.

The system includes a tarp with handles so the machine can be strapped to the patient, lifted and put onto a gurney without interrupting compressions. The tarp holds up to 300 pounds in torso weight alone. 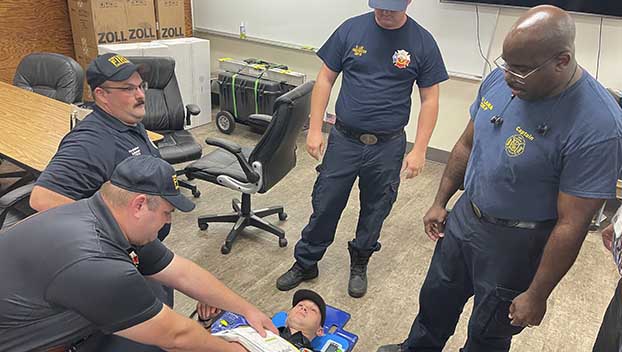 “It frees them up to focus on the patient’s condition and making sure the other needs for the patient are being met,” Benson said. “The more consistent your CPR is, the more effective it is because it keeps blood flowing between your brain and your major organs.”

Kasko said the machine goes with patients until they reach the emergency room. And it provides a type of patient care that hasn’t been available.

“They can’t do CPR in the helicopter expect for on pediatrics because of space constraints,” Kasko said. “There’s not a whole lot of room in there, and a helicopter has four staff members — a pilot, a mechanic, a nurse and a paramedic. And then they’ve got to shove a patient in there. So their room is really, really limited.”

AutoPulse allows for CPR in a medical helicopter.

In addition, the device tracks the patient’s vitals, any medications given and other necessary information that can be printed for quick transfer to physicians once the patient reaches the hospital.