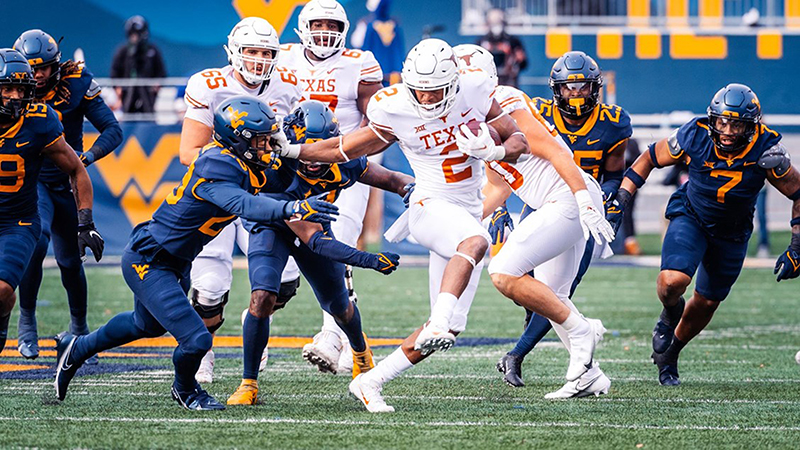 Robinson and Johnson look to join a prestigious trio of Longhorns who have won the Doak Walker Award, which began in 1990. Ricky Williams was a two-time winner, bringing home the trophy in 1997 and 1998, while Cedric Benson collected it in 2004, and D’Onta Foreman won the honor in 2016. Texas’ four Doak Walker Award trophies are the second-most by an FBS school all time. (Wisconsin, 5).

Robinson, a 2021 Doak Walker Award semifinalist who has also been named to this season’s Maxwell Award watch list, has rushed for 1,830 yards on 281 carries (6.5 ypc) and 15 touchdowns, while also catching 41 passes for 491 yards and six touchdowns during his first two seasons on the Forty Acres. The junior’s 1,830 career rushing yards rank 21st all-time in program history. Last season, the Tucson, Ariz. native was a first-team All-Big 12 selection and honorable mention as the Big 12 Offensive Player of the Year, and named a semifinalist for the Maxwell Award and Earl Campbell Tyler Rose Award in addition to the Doak Walker Award. In 10 games, he rushed for 1,127 yards on 195 carries (5.8 ypc) and scored 11 touchdowns and hauled in 26 receptions for 295 yards (11.3 ypr) and four touchdowns. Robinson ranked third in the conference in total touchdowns (15), fourth in scoring (9.0 points per game), sixth in rushing yards, rushing touchdowns and all-purpose yards (1,422), and seventh in total points score (90). His 142.20 all-purpose yards per game and 112.7 rushing yards per game ranked eighth nationally and third in the Big 12. He surpassed 100 yards rushing six times during the season, highlighted by a 35-carry, 216-rushing yard (6.2 ypc) performance at TCU.

Johnson, a native of Port Neches, Texas, has rushed 299 times for 1,636 yards (5.5 ypc) and 18 touchdowns during his first three collegiate seasons. Last season, he appeared in 12 games with three starts, carrying the ball 96 times for 569 yards (5.9 ypc) with five touchdowns, highlighted by standout performances in victories over Rice and Kansas State. Against the Owls, Johnson netted 112 yards on three carries, including a career-long 72-yard touchdown. In the season finale against K-State, Johnson led UT’s winning effort with 31 carries for a career-best 179 rushing yards and one touchdown. The senior’s 1,636 rushing yards rank 28th all-time in program history.

The PwC SMU Athletic Forum Board of Directors will name ten semifinalists in November, and three finalists, as voted on by the Doak Walker Award National Selection Committee, will be announced in November. The committee will cast a second vote in December to determine the recipient. The National Selection Committee consists of past recipients, former NFL All-Pro and college All-America running backs, media members and selected special representatives. The recipient of the 2022 Doak Walker Award will be announced live on The Home Depot College Football Awards.

The award is named for SMU’s three-time All-America running back Doak Walker. It is the only major collegiate award that requires all candidates to be in good academic standing and on schedule to graduate within one year of other students of the same classification.