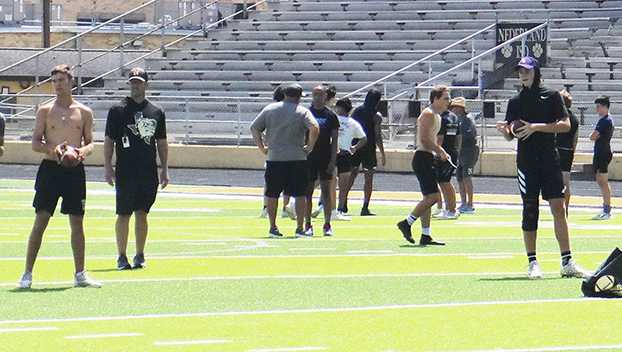 NEDERLAND — Two players have been taking snaps as the Bulldogs quarterback and both could be on the field at the same time when Nederland takes the field next month.

Trosclair stands at 6’4” and is more of a pocket passer, while Sunday excels on the run.

“Aidyn works at other positions on offense and defense,” Barrow said. “He is very athletic. He works safety for us on defense. He has worked the quarterback. He can play some running back and receiver, as well.”

Barrow said both have done well at the quarterback position over the summer workouts, but the coach would like to have a solid plan on who is going to be where on the field as soon as possible.

Both players have earned the respect of the young team.

Barrow did not rule out the possibility of seeing each quarterback taking snaps behind center in 2022 and potentially in a game, depending on the situation.

“I prefer us to figure out, as soon as we can, how we will be the best team,” he said. “If I had to say right now, it would probably be having both of them on the field in some capacity, however that is. We may be the better team if Adam is the guy, because it allows us to put Aidyn somewhere else. That is another position that is solidified for us, wherever he would play. At the same time, knowing how important that position is, we want to see early on how we will be the best team.”

Both players have skills and abilities that provide mismatches for defenses and allow the Bulldogs to cook up some creative plays.

“Adam has been at other spots, as well,” Barrow said. “He is just working at quarterback for us, but with his height, he can be a problem. In the red zone, especially, that is a matchup problem for teams. As a defensive coordinator, listening to our guys talk about it, when you have a quarterback that can do different things, that is more work defenses have to do that week.”

The real benefit to having gadget plays is the fact the defense has to devote some time to accounting for them. Even if that just takes away a few minutes from a defensive coordinator making a game plan, that is an advantage for the offensive that might not even use the play.

Nederland will have two scrimmages and three non-district games to get the feel for best direction for its offense. The Bulldogs first scrimmage is Aug. 12 against Hamshire-Fannett at Bulldog Stadium.