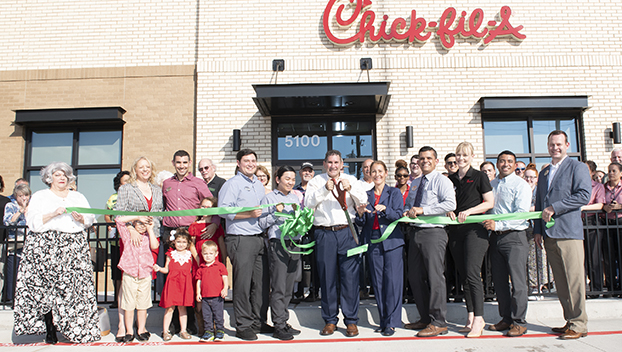 The new Chick-fil-A hosted a ribbon cutting this week. (Courtesy of Bart Bragg)

GROVES — Sales tax revenue in the City of Groves is increasing by leaps and bounds, according to information released by the State.

Groves City Manager D.E. Sosa can only speculate, but the thought is a portion of the increase came from the additions of Starbucks and Chic-fil-A. 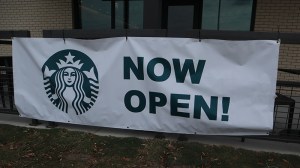 Those, he said, are the only two major differences over the last year.

The increase is a big player as budget time approaches.

The majority of the city’s funds come from property taxes — about $6 million, while sales tax generates about $2 million.

“If we didn’t have this sales tax, we’d either have to cut services or increase taxes — sales tax makes up about 20 percent of the general revenue budget,” Sosa said.

Without good sales tax revenue, the city would need to rely more on property taxes to help stabilize the budget.

Looking toward the future, the planned sports complex at Hogaboom Road will also bring more customers to the city, with spectators and participants for the youth soccer and football games, Sosa said.

Work on the football fields is nearing completion, and the league is hoping to use the fields this upcoming season.

There are also new businesses coming to the city, as well as space being made to accommodate the growth.

Las Rosa’s Mexican Restaurant is opening an additional location in the city on 39th Street, and Domino’s is building a new spot on Main Avenue with room for other businesses.

Elizabeth Cravens with Mid-America Contractors is finishing up the strip center near the site of the old Spear’s Grocery and Pizza Artista, also on Main Avenue.

Ronnie Boneau, executive director of the Groves Chamber of Commerce, said he had not seen the document from the State Comptroller’s Office showing the increase in sales tax revenues due to work on the upcoming Pecan Festival and related pageant.

But, as longtime director of the chamber, he understands the importance of the increase and is pleased to hear the news.

City leaders will begin work sessions to discuss the 2022-23 fiscal year budget next week with the plan to have a draft of the document done by Aug. 1.

A key component to the budget — the effective tax rate — will be set by the county and released during the first or second week in August. This means local entities must use a sample figure to calculate revenue.