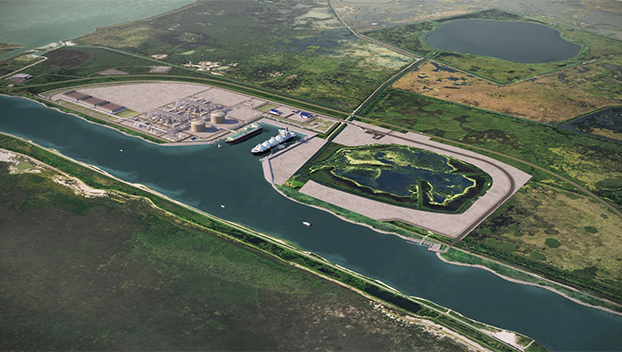 If Port Arthur LNG, including all project phases, comes to fruition, it could become one of the largest LNG export facilities in the Western Hemisphere.

Local interests waiting to benefit from the windfall that entails are waiting on parent company Sempra to make a final investment decision on the project.

A major step in that direction was announced this week with a heads of agreement between Sempra Infrastructure and ConocoPhillips to develop the Port Arthur LNG project and jointly participate in other related energy infrastructure in Southeast Texas and the western coast of Mexico.

In speaking to Port Arthur Newsmedia this week, Sempra Infrastructure President Dan Brouillette said the final investment decision has not been made, but many talented and capable team members are working to have that announcement for 2023.

“I think the ability of the people of Port Arthur and the labor force there, in particular, is so strong,” Brouillette said. “That is another very attractive part of this project — for me personally, for Sempra Infrastructure and I know for Conoco — is the quality of the workforce there. They are dedicated, hardworking people. They look to the future.”

The project is expected to include two natural gas liquefaction trains and LNG storage tanks, as well as associated facilities capable of producing, under optimal conditions, up to approximately 13.5 mtpa of LNG.

Sempra Infrastructure and Bechtel are also working on updating the terms of the project’s fixed-price engineering, procurement and construction contract that was previously announced in 2020.

A similarly sized Phase 2 project is also under development.

There are still many steps in the process that each entity must go through, Brouillette stressed, but the heads of agreement announcement establishes a framework to work together and work under.

The next step is to put detail around it, in what is known as dependent documents spelling out the specific agreement and, ultimately, leading to a sale or purchase agreement. That then leads to a final investment decision.

Brouillette did not provide specific timelines for those steps, but did say work is actively taking place to achieve those outcomes.

The basic outline between ConocoPhillips and Sempra Infrastructure calls for:

Ryan Lance, chairman and chief executive officer of ConocoPhillips, said in a news release that the agreement with Sempra provides ConocoPhillips a ground-floor opportunity to participate in premier LNG developments.

“Sempra brings a long history of successful LNG project development, and we look forward to working together to provide reliable LNG to support the energy transition and strengthen U.S. and global energy security,” Lance said.

That partnership was something Brouillette stressed, noting Lance is one of his most trusted sounding boards in the industry.

“Conoco has a long history in both natural gas production and, specifically, in LNG,” said Brouillette, who previously served as U.S. Secretary of Energy.

He said Conoco provided some of the very first LNG shipments from the United States to Japan in the late 1960s and early 1970s.

“That’s what makes them a particularly important partner to Sempra, which also has a very long history in this business,” Brouillette said. “You have two very powerful players coming together to potentially develop this site.”

The ability of ConocoPhillips to aggregate gas and get it to Port Arthur is particularly attractive.

“We don’t have to worry about a gas supplier; we have one in Conoco,” Brouillette said.