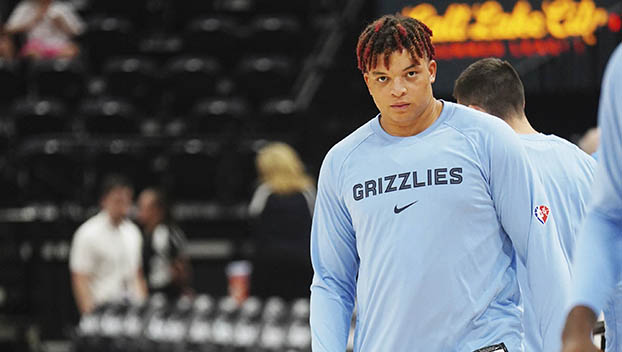 The Lofton family has been in Las Vegas for the NBA Summer League as Kenneth Lofton Jr. tries to play his way onto the Memphis Grizzlies’ roster for the upcoming season.

Kenneth Lofton Sr. said he and his son went to summer league last year to watch and have been several times prior for AAU tournaments.

Lofton Jr. signed a two-way contract with the Grizzlies after he went undrafted. The contract is not fully guaranteed, like NBA contracts, but the team could offer him one based on his performance in the summer league. If he is not offered a fully guaranteed contract, Lofton Jr. could play for the Grizzlies’ G-League team, which serves to develop players for the NBA.

The summer league in Las Vegas lasts five games. The Grizzlies play their fifth game today at 5 p.m. against the Spurs. Lofton played in three of the Grizzlies’ first four games and averaged 15 points and 4.6 rebounds per game. He was the leading scorer in each of the last two games and out-performed the second overall pick in the NBA draft when they went head to head.

Lofton Sr. has watched his son perform in person at every level, but he said watching his son in an NBA jersey feels different.

“I watch the summer league every year to see the newcomers,” he said. “This year, watching him play, and seeing him up close and personal fulfill his dreams, is awesome. It is fun to sit in the stands and listen to people comment on him. A lot of people are in awe that he can move the way he moves.”

Even with professional coaches all around him, Lofton Sr. said he can’t fight the urge to give his son pointers.

“I am always going to do that,” he said, laughing. “Sometimes I do it during the game.”

Lofton said his son was well prepared by Louisiana Tech on how to deal with a professional schedule. But even with all of the new demands, Lofton Jr. has been able to enjoy his time in Las Vegas.

“He is really enjoying himself,” his dad said. “He is really putting in work and becoming a pro. He really seems to be a fan favorite here.”