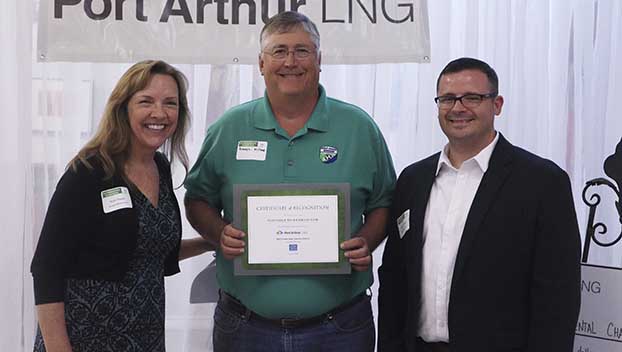 Money does not grow on trees, but the Gulf Coast Youth Soccer Club is hoping a recent grant provides funding for some in the near future.

The organization was one of 13 non-profits to receive funding from the Environmental Champions grant funded by Port Arthur LNG, which gave away $55,000 in the effort.

The club applied for the grant to plant dozens of trees at the GCYSC 34-acre complex, which features 26 soccer fields. The site is located at 5601 Twin City Highway.

The money came in past time for the soccer club to plant the trees this year, but Marketing and Public Relations Director Daryl Miller said the plan is still full go.

“We were set up to buy the trees from a landscaping company in Nederland,” Miller said. “The people that supplied them were out of trees because the season passed. She recommended putting them in the ground in February.”

The group had to decide between planting smaller seedlings or their original plan of planting more mature trees between 10-12 feet tall.

“They would make more of an impact and be nicer than 12- or 18-inch plants,” he said. “We want those trees and need those trees. We would like to wait until February and get it done right.”

Along with the beautification effort, the trees provide much-needed shade for fans to watch the soccer games.

“We were told to use half oak trees and half maple trees and alternate them every so many feet,” Miller said. “We really need it for our elderly fans. We have had people pass out from the heat. Shade is something we need, and beautification is something we need. It will also help it look better from the street.”

The trees would also come down Hogaboom Road and Twin City Highway and wrap around into the parking lot.

The landscaping is part of the upgrades in the group’s master plan for the complex.

“We are going to put lighting along with a clubhouse and some buildings,” Miller said. “We want to build a stadium or a full-size field with lighting that is good enough for competition grade for high schools or if we want to have a game-of-the-week. We work a lot with some of the professional soccer academies and we want to have a place where they can play friendlies to expose our region to their academy.”

Prior to the grant, Miller said the organization budgeted to plant 30-35 trees over the next three years, but said they would be able to do all of the trees next year thanks to Port Arthur LNG.

“It will make a dramatic and immediate impact,” he said. “I appreciate companies like them doing that. Being on private property, we don’t have access to government funds. We have to raise money or get grants to do anything out here.”