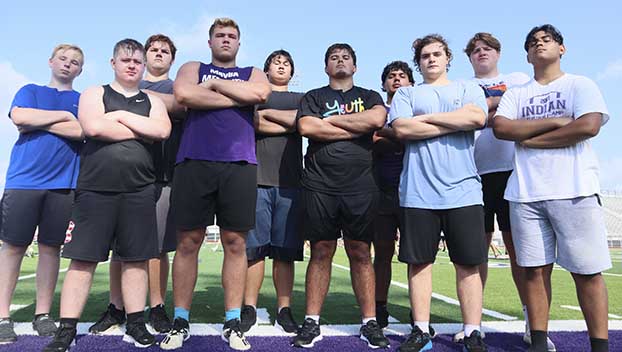 PORT NECHES — Most head football coaches will say controlling the line of scrimmage is the most important key to a team’s success.

If a quarterback can stand in the pocket and not have to worry about unseen pressure, he can make reads and get the ball to receivers on time. A running back can rack up yards without being touched.

Being an offensive lineman is not easy. It requires one to be naturally big, agile enough to move in space and strong enough to push other people of similar size backwards.

This fall Port Neches-Groves is believed to feature one of the better offensive lines in the area, if not, the state.

Jackson, who is entering his sophomore season, said the unit is aware of the outside expectations and thinks the group will live up to them.

“You have a team that went to the third round of the playoffs and you return five players,” Feller said. “You also have some really good young guys coming up through the program pushing you. Everyone is telling you how good you are. I would hope they have a sense of urgency and they have. We have six or seven varsity-level players that are having a really good offseason.”

Fans tend to focus on “skill positions” like quarterback, running backs and receivers because they are the ones scoring touchdowns. Feller said all of that starts with the offensive line.

“It doesn’t matter what style of offense you play, the game is about blocking and tackling at the line of scrimmage,” he said. “We are blessed to have big, strong kids. It is not really anything that we have done. It is the structure of our community, where we have big-gened people. You add that with the honor, pride and tradition that has been taught since kindergarten.”

Feller said the kids also have to have a particular mentality.

Miguel summed up the mentality with one word: dominate.

Even as intimidating as the group can be, they maintain a sense of humor. When asked their favorite part of playing o-line, one of replied “pancakes.” Another responded with “Wait, eating them or doing them.” A pancake in football is where a blocker knocks a defensive player to the ground.

Jackson said there is nothing better than knowing the person lined up across from him can’t do anything with him.

“When it happens on the first play, I just know I am going to keep doing it every play,” he said. “I am a sophomore and I played in a few varsity games as a freshman and I dominated everybody.”

The group said last year’s team set the bar high with the expectation to make it past the third round of the playoffs.

Ware said the team has developed a friendly rivalry with Memorial, who PNG plays in the non-district schedule. Over the past few seasons, the Titans have had players on the defensive line sign to Division I football programs.

PNG’s first game will be against Little-Cypress Mauriceville Aug. 18, followed by the Titans Aug. 26. Both games are at PNG High School.