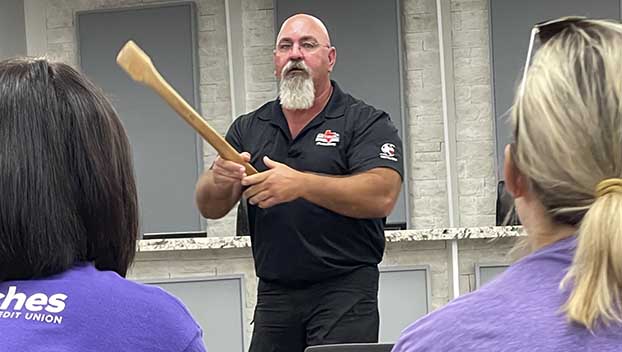 Educators in the Port Neches-Groves School District on Tuesday went through the first of two situational awareness courses — but the lessons went far beyond the classroom.

“I understand we’re talking about this as your place of work, but do people just twist off at work?” said Jeremy Way with the Southeast Texas Regional Advisory Council. “Or do people twist off all over the place — Walmart, movie theaters, it doesn’t make a difference where you’re at.”

Way — a trained police officer, firefighter and paramedic — led the first of the two sessions at the new district administration building, focusing first on how to recognize signs of danger, and afterward implementing Stop the Bleed.

Stop the Bleed is a national campaign aimed at training everyday people to act as a first responder until one arrives on scene.

Joined with Way were members of the Port Neches, Groves and Port Arthur fire departments for the event organized by the Medical Center of Southeast Texas.

During the situational awareness portion of the training, Way made several points, including the importance of taking leadership.

“If you make a blanket statement and say, ‘call 9-1-1,’ how many people do you think will call 9-1-1? Not one person will call 9-1-1. You make that assignment,” he said, while pointing to one individual to demonstrate. “You call 9-1-1. When gunshots start going off, what do you need more than anything else? Help.”

Way played a video testimonial from Kristina Anderson, who was 19 in 2007 when she was shot three times in her classroom at Virginia Tech.

“He walks in shooting. There’s absolutely no time,” she said in the video. “I got on the floor, my knees under the desk, stomach on the seat, hands around my head, eyes are closed. I didn’t think I was going to get shot, but I knew something really serious was going on. And I knew for whatever reason that I should just play dead.”

But, Way said, that isn’t always the answer.

“In the absence of knowledge and training, every single family member, all your kids, all your friends will do the exact same thing,” he said. “We’ll say (audience member) is sitting right here. The shooter walks in, he produces two weapons, he walks by her row, he walks by the next row, and she has training. She has knowledge. She’s not going to sit there and let this punk shoot everybody. So she picks up that cheap, light desk and smokes him in the back of the head with it.”

Way also suggested educators consider having things like wasp spray — kept out of the reach of students — and remember fire extinguishers are better used when sprayed than utilized as a forceful weapon.

They also covered domestic situations that can make their way onto a campus.

“We talk about active shooters, but in reality we have the most precious emotional resource of families,” said Deputy Superintendent Julie Gauthier. “We educate kids; we are not the family court. Dr. (Mike) Gonzales and we will not put up with it on our campuses. We’ve had those issues and shut it down as quickly as we can.

Way encouraged continued training above all.

“If you don’t practice these things, if you don’t run drills, if you don’t know what to do — when that first shot pops off, your mind motor skills are gone,” he said. “If we don’t learn from the mistakes of others, then we are fools.”