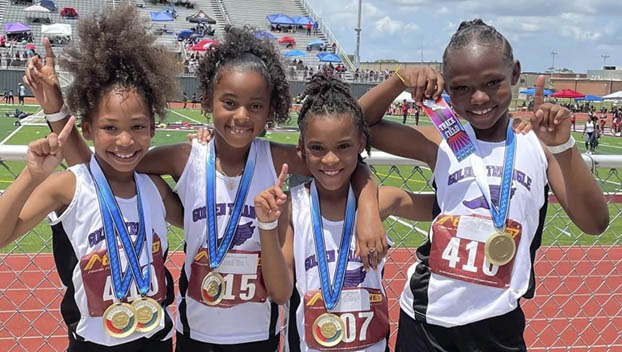 Several young area track stars have qualified to participate in the Junior Olympics in North Carolina.

The Golden Triangle Track Club has started a GoFundMe to help parents pay for travel cost.

The club’s 4×100 relay team of Teryn Antoine, Khloe Joubert, Payten Gonzales and Laila Booker clocked the fastest time for an 8 and under team earlier this year with a time of 1:05.06. The squad recently broke its own record by running a time of 1:03.14 at the group’s most recent event.

Coach DeVante Conner said he is anxious to see how the kids perform.

The girls still hold the fastest time in the country for that age range heading into the Junior Olympics.

“It has been a joy,” Conner said. “Last year Khloe and Demijah went on their own in individual events. It is nice to see them make it back.”

Conner said the GoFundMe will help parents make the trip easier and not have to go completely out of pocket.

“We have been doing some fundraisers,” Conner said. “Last week we did a link sale, which had a pretty good turnout. We were looking at flights and they are about $500-600. They decided they are going to drive there. We are also going to be there a whole week. Hotel expenses are about $1,000 for the week. We just wanted to help the parents out.”

Conner said he is thankful for the community’s support.

“I am thankful for the parents for trusting us with their kids to be successful this summer,” he said. “I just hope that keeps carrying us. Each year we are getting bigger and bigger. Last year we had three kids make it and this year, we doubled it. As years go by, we want to get bigger and have more people know about Golden Triangle Track Club.”