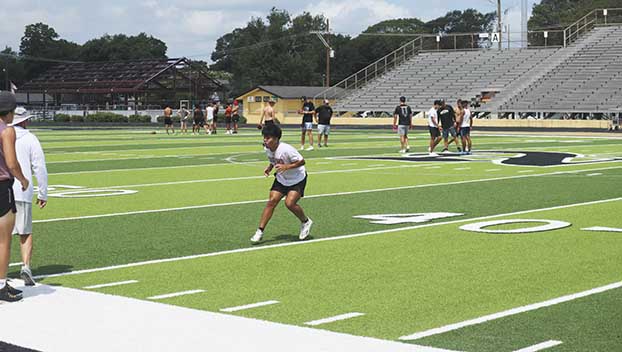 NEDERLAND — Last year, Nederland Bulldogs linebacker Ricky Galvan missed some time on the field due to a stomach illness, but the incoming senior said he is ready to reassert himself.

“It’s good to be back on the field and see all of the young guys here,” he said. “We are excited to see what we got.”

Galvan will play outside linebacker for the Bulldogs in the fall.

Defensive Coordinator Chris Theriot said the incoming senior is small for his position but makes up for it with determination.

“His stature may not look like it, but he will run through a wall,” Theriot said. “He is highly competitive. He brings a lot to our team because of his energy and tempo in practice every day.”

Theriot said defensive players have to be tough due to how much the game has changed over the past decade.

“At that position, offenses stretch you out and put you in different matchups,” he said. “With the (Run Pass Option) system, there are so many responsibilities on him. He has a tough, tough job.”

Theriot said the defense tries to set a tone in practice.

“We tell them that the offense doesn’t wait on us,” he said. “We are fast-paced. We coach on the run as fast as we can. We don’t do a lot of coaching in between plays because of that aspect. Ricky has been around the system.”

Galvan’s experience might be his most important attribute. With the Bulldogs fielding a relatively young team, Galvan’s leadership is exactly what Nederland needs.

“We lost a lot of guys,” Theriot said. “Him being in that position to make calls helps us. It helps having him out there to guide those younger guys.”

While the position requires a lot of cerebral practice, Galvan said his favorite part of playing linebacker for the Bulldogs is the physicality.

“I like contact and hitting people,” he said with a smile. “I really like coach (Jay) Stone. He is a really good coach and has taught me a lot.”

When not playing football, Galvan enjoys being hunting and fishing. This year, he is trying get a few hunting trophies while trying to keep the Bum Phillips Trophy in Nederland.

“I want to win Mid County Madness again and show everyone we still have it,” he said. “No matter who we have, we are going to still give it our all.”