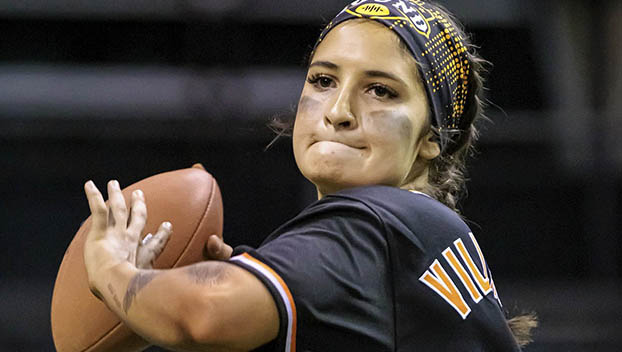 The X League, which started this year, is a 7-on-7 full contact football league that plays on a 70-yard field.

Villanueva, a former softball standout for the Lady Bears, dove into the fire as a rookie in the exciting league.

She got in some playing time as the backup quarterback for the Sound in the squad’s 50-19 home opening win over the Los Angeles Black Storm a couple weeks ago.

“It was a great experience. I had butterflies when the game started but got laid out after taking a couple big hits, and I was like, ‘Here we go, I’m ready,” said Villanueva.

Villanueva went on to rush for a touchdown and handed the ball off for another.

She is slowly taking in the game and learning the system at every turn.

“I love the opportunity to help lead my team, but I have so much more learning to do,” Villanueva said. “I’m trying my best to learn the right plays kinda based off what the defense shows me. Learning is my favorite part of the game, so that kinda works out perfect for me.”

Villanueva is the backup to starter Michelle Angel, who has helped her so much with the learning curve.

“Michelle has been so awesome to me and is a big reason why I’m here,” Villanueva said. “She knows so much about the game. Really, all of my teammates are great. We know we are part of something special. We are kinda like pioneers, helping to get this league up and running.”

The Sound play at the HEB Center in Cedar Park.

“We had a really good crowd for our first game,” said Villanueva. “Hopefully we can build on it and keep winning. We’re off to a great start.”

Villanueva loved tossing the football around at an early age.

“My uncle use to have a crawfish boil, and when we were at his house, the guys would play a game in trying to get the football inside the small chimney hole on the top of the house,” Villanueva said. “They would do it and bet money, like change, on who would get the ball through the chimney hole. They would try and try. They let me try it and I made it a couple times. I was like 5 or 6, and they were all like, ‘Did ya’ll just see that.’”

At carnivals growing up. Villanueva won quite a few stuffed animals for herself and friends.

“I never was big on riding the rides,” said Villanueva. “You could always find me at the games, either doing the football toss or the basketball shot.”

Villanueva was a standout softball player but never was shy about mixing it up with the boys in sandlot football.

She was also a trainer for the Battlin’ Bears football team, where she showed off her arm on numerous occasions.

“In the apartment complex we lived in, I was always out there playing football, full-contact sometimes, with the guys,” said Villanueva. “Good players like Chris Winters and Mark Netherly were out there all the time and they taught me a lot. I would take a good hit and they would help me right back up. They loved how tough I could be.”

Sound coach Mike Olvera heard about Villanueva after he saw a viral video that was posted of her throwing almost 50 yards. He came to Orange to take a look.

“He liked what he saw in me and so did the coaching staff,” Villanueva said. “He’s such a great coach and I’m so proud that he believed in me.”

The X League is a professional football league backed by Pro Football Hall of Famer Mike Ditka and kicked off in June.

The league is hoping to create a watershed moment for viewer autonomy. Fans will have the option to toggle between two dozen camera angles — or even simulcast several at once — to watch the game however they want. That could mean following the action from a non-traditional vantage point, such as an end zone view or by isolating a key player at all times.

Viewers will also have the choice of just as many audio channels, offering unprecedented access to on-field and in-venue communication. Just as the Alliance of American Football introduced the ability to listen to instant replay deliberations, X League fans will also be able to select a channel to eavesdrop on the offensive coordinator’s instructions to a quarterback or perhaps what the chatter is like in the owner’s box.

The X League said it has raised more than $30 million in Series A funding and has partnered with global streaming media partners such as Eurosport, Sony Pictures Television, StarTimes and the Endemol Shine Group; the latter partner, whose TV credits include “Big Brother” and “MasterChef,” will produce a docuseries on the X League.

At launch, the X League was a single entity with teams in Atlanta, Arizona, Austin, Chicago, Denver, Kansas City, Los Angeles, New England, New York and Seattle. A national tryout for players took place at a combine in January, with more than 1,800 women registered. The league emphasizes fantasy and betting options to fans, who also will have the opportunity to call some plays used in the game.

Villanueva and her Sound teammates will venture on the road for the first time Saturday when they visit Atlanta.

“I’m looking forward to getting on the road and seeing what that is like with all of my teammates,” said Villanueva. “I’m still adjusting and hoping I get some more playing time. Getting that first win was big for us. It was fun for sure. It was the first time seeing a defense blitz me 100 percent. It was different, but that’s the pressure I’ve been waiting to see. I think I perform well under pressure.”