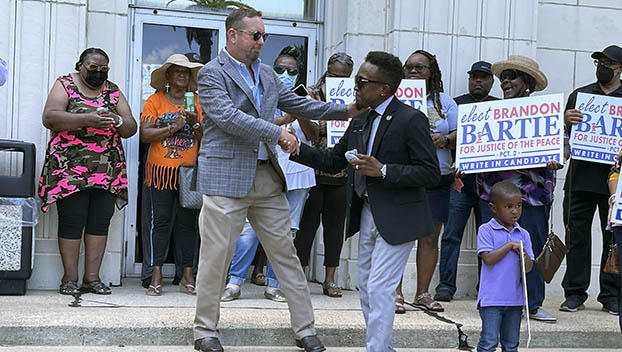 Surrounded Friday by friends, family members and local politicians, Brandon Bartie announced his plans to run for Justice of the Peace Precinct 2 as a write-in candidate.

Judge Marc DeRouen, who has held the seat for 12 years and was defeated in the March primaries by Joseph Guillory, stood behind Bartie and shook his hand following the candidate’s speech.

He was introduced by Constable Christopher Bates. 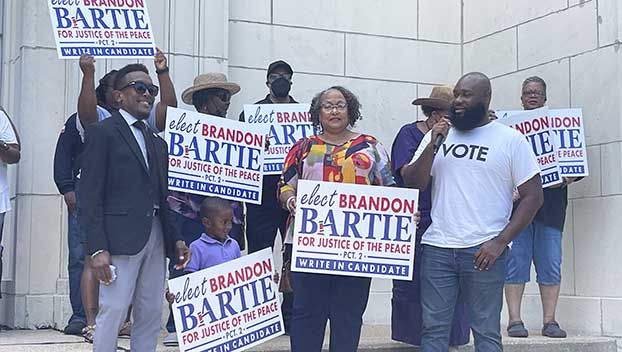 Bartie, 38, has served on the Port Arthur Independent School District Board of Trustees since 2015.

If elected, he said he would hope to stay until the end of his term next year to avoid forcing the district into a special election or having to appoint a new member.

With politics in his blood, Bartie said his desire to enter the field came from watching his family members vote.

Once he was able, his interest in politics grew.

“My coach — he’s a commissioner now, Commissioner (Michael) Sinegal — he was the one who signed me up so I could get my voter registration card at school,” Bartie said. “Once I got that in, I was so excited just to vote alone. Then after that just being around politics and seeing different things, it sparked an interest in me. And I’ve been in it ever since.”

The school board member who is also the son of Port Arthur Mayor Thurman Bartie said he has shadowed the sitting judge in preparation for the role.

“Years ago I sat down and spoke with Judge DeRouen, and I told him, ‘Hey judge, this is my future. I’m going to be sitting in this chair.’ And he said, ‘Just give me some time to get out,’” he said. “We became real good friends and I always supported him in office.”

Bartie has been sitting in with DeRouen to see how he handles day-to-day business.

“They always say it’s time for our younger generation to step up,” he said. “I’m taking that and leading with that. I’m stepping up and moving forward.”

With no Republican candidate, Guillory was declared winner following the March primaries. Bartie will now face Guillory in the November election.