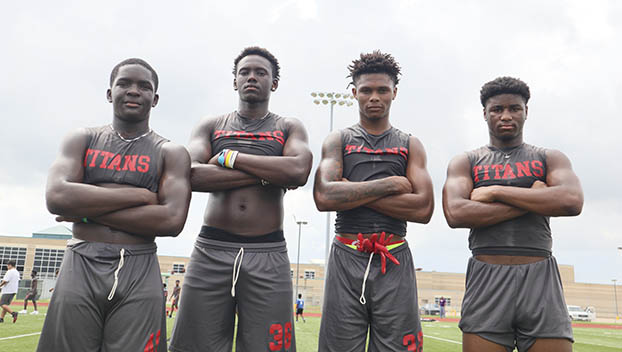 The Memorial football team has had a ton of success on offense over the past few years, but Head Coach Brian Morgan said the group of receivers taking the field for Titans this upcoming season might be the most talented he has coached.

Harper, who is one of the more outspoken receivers, said he likes what the group has to offer.

“I think our biggest strength is our versatility,” Harper said. “We have speed, height and athleticism at every position. From the slots to the outsides, we have it all.”

Morgan said his team has not had this amount of talent at the position since he has been the head coach.

“I think the depth of talent is the key thing,” he said. “We have obviously had some really talented guys come through, but we usually only have one really good one or two really good ones at a time. I think right now, the four starting receivers are really talented at catching the ball, running routes and running. We have two really big guys. I think there are some things like that we haven’t had in the past.”

Morgan said the program typically had a No. 1 receiver and then a speedster to compliment him.

“You had to scheme some stuff for some guys in the past, but with this group, you are comfortable throwing to any of these four on third down. They can all catch the ball. Three of them, for sure, are going to block really well in the run game. I know those three will because they have been with the program for years.”

Morgan noted Harper played on both sides of the football last year.

“He is really tough, has high energy and can run,” Morgan said. “He was part of our regional track team. He is an explosive guy. He is a good athlete and has really developed.”

“He really gives us a physical presence on the field,” Morgan said. “He catches the ball well. He gives us a mismatch in a lot of situations.”

Green said it has been fun to watch the group improve.

“We have all gotten lot faster,” he said. “I think we have a good season ahead of us.”

Goodie moved to Port Arthur from Louisiana and has the potential to be the go-to guy for the Titans. At 6’2” and 170 lbs., Goodie has shined in the 7-on-7 league and has impressed colleges at multiple camps this summer.

“He is really natural and can really run,” Morgan said. “He has really developed over the past six or seven months that he has been here.”

Goodie, who is more reserved, had to adjust to playing at a larger school.

“I feel like we can make plays all over the field,” he said. “I feel like the level of competition is a little higher.”

Morgan said he is excited to see how Amir Young and Calvin Morris play their way into the rotation as the season goes along.

“They are going to be good players for us,” Morgan said. “As the season goes on, I think they will show up more and more on Fridays, and that will make us really, really good.”

Holmes said the group is highly competitive with each other.

“I am going to get the most touchdowns on the team,” he said with a smile, looking at his teammates.

Harper chimed in with his desire to have the most yards.

The fastest on the field might have to be determined when the guys put on pads, but Holmes was quickest to say he was the fastest, despite a rebuttal from Harper.

“We have trust on the field,” Harper said. “We don’t have to go out there and think we have to do all of this or that. We can all do our own amount and it will add up.”