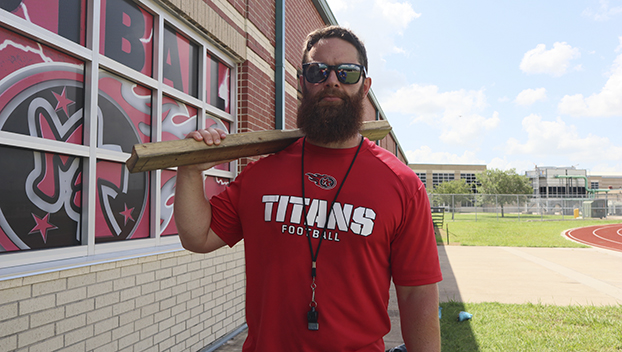 Members of the Memorial football team groaned as the realization that a member of the staff was back from vacation.

“Coach Miller is back,” could be heard throughout the facility and practice field.

Josh Miller, who is the strength and conditioning coach for Memorial, has been an important part of the Titans program since Head Coach Brian Morgan took over.

“He brings a great mindset and consistency,” Morgan said of Miller. “The weight room and the strength and conditioning part of it is great. He really creates a mindset and does a great job of echoing things I say. He is a guy I can bounce a lot of ideas off of.” 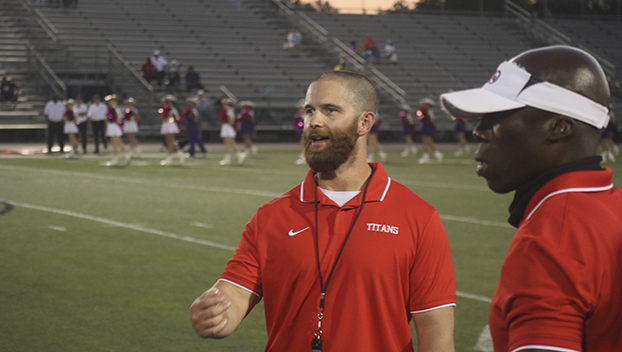 Morgan and Miller go back to when they were on the Lamar Cardinals coaching staff.

“He has a great energy, especially for days like this when it is hot,” Morgan said. “It is good to hear it from somebody else. When you think about the players, they are hearing me and their position coach talk every day. It is a voice that they don’t really hear. He works a lot with physical and mental development.”

Morgan said the coaching staff had to figure out how to emulate Miller’s structure during his recent vacation.

“He took a few days off for the first time since we have been here,” Morgan said. “The kids and coaches hadn’t really had time without him. It took us a minute to see who does different things and get the same structure he does because he is a very regimented guy.”

Miller is dedicated to his regiment. When Port Arthur Newsmedia approached him for the feature, he looked down at a stopwatch, which was running, and politely asked if the interview could be done in two minutes.

Many may recognize Miller’s voice, which can often be heard on the sidelines in games, bellowing a hardy “first down.” He hopes his energy is contagious.

“I want the kids to know that we are here to work each day,” Miller said. “I hope they get the expertise in strength and conditioning from me, but I also experienced what they are going through and can relate to where they are right now as far as their training.”

Miller said the first down calls and energy is part of who he is.

“If it is not genuine, the kids are not going to believe in it,” he said. “I do try to bring energy, and I was blessed with a great voice. I try to use that in any way I can. It is all about the kids and putting the kids first. If there is something I need to do to put them in a position to win — create an atmosphere conducive to winning — if my voice can do that, ill give them everything I have got each and every day.”