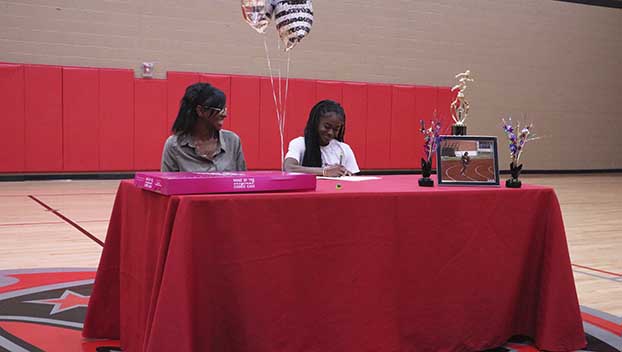 Memorial sprinter Erial Fontenot, right, signs a letter of intent to Texas A&M-Corpus Christi with her mom Erica Lowe by her side. (Chris Moore/The News)

For the first time in three years, Memorial track star Erial Fontenot competed for the Titans without her mother knowing just how good of a sprinter her daughter had become.

Fontenot was injured during her freshman season but vowed to come out the following year. During her sophomore year, she ran for about a month before the pandemic prematurely ended the school year. Her mom, Erica Lowe, was not able to make a track meet during her junior season because meets typically go on during a weekday and often are out of town. Lowe was finally able to watch her daughter run at the district meet at Barbers Hill this year and saw what college recruiters already knew.

“I did not know she was that good,” Lowe said. “The first time I saw her run, I was blown away. People had been saying she was so fast but I didn’t really know. When I saw her, she was moving. I knew that was her calling.”

Apparently Texas A&M-Corpus Christi also believe track is Fontenot’s calling since they offered her an athletic scholarship to run for the Islanders. Memorial held a ceremony Tuesday to honor Fontenot’s commitment to TAMU-CC.

The commitment made sure that one of the sprinters more embarrassing moments on the track wasn’t her last. During the regional meet this year, Fontenot slipped while running in a relay in an attempt to qualify for state.

“I’ve I didn’t trip, I think we would’ve went to state,” Fontenot said.

She said she was filled with emotion to be able to obtain a scholarship.

“I don’t really know how to feel,” Fontenot said. “The coach had been texting me for a little while and they texted me to offer the scholarship.”

The sprinter said she wants to continue the legacy of Memorial graduates that perform well for TAMU-CC.

“The coach said the 409 had never let them down,” Fontenot said. “That is what I want to do. I want to keep their hopes up and represent the area. Not many people get this opportunity.”

She added that she wants to study business while in college but said she doesn’t know just yet how she would apply it after she graduates.

“You can do anything with a business degree,” she said. “You have to know the ins and outs of everything.”

Lowe said she is looking forward to visiting Fontenot for some beach vacations.

“We have already discussed going up there once a month,” Lowe said. “It is right by the beach. We already have a plan to make a weekend beach visit out of it. As long as she takes care of business, I don’t mind her having fun. I don’t mind going and having fun either.”