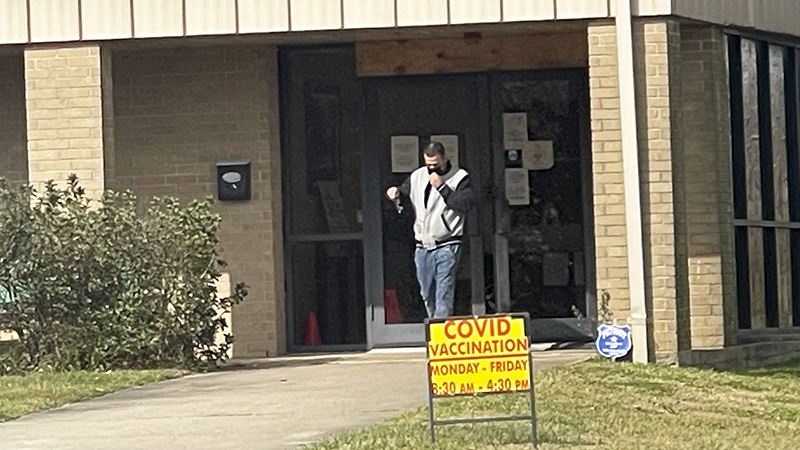 The vaccine clinic in Port Arthur is located at 3501 Cultural Center Drive and has booster shots available. (Monique Batson/The News)

With positive COVID-19 numbers again on the rise, local health officials are working to remind residents that vaccines are available for everyone 6 months and older.

The Port Arthur Public Health Department, which serves four cities in Jefferson County, reported 43 positive COVID infections for July 1-4. There were nine cases in Port Arthur, eight for Groves, 15 for Nederland and 11 for Port Neches.

The Port Arthur Public Health Department reported nearly 100 positive cases on only June 27, with more than 70 to follow, which included one death June 29 of a Groves resident believed to have underlying health conditions.

Also on June 27, the City of Beaumont reported 130 new cases. Meanwhile, according to information from the Texas Department of Health and Human Services, numbers reported from Orange and Hardin counties remained at 10 or below each day last week.

“Numbers have been up since May, which we’ve pretty much attributed to graduation parties,” said Judith Smith, director of the Port Arthur Health Department. “We have not seen a large amount of deaths like last year in July and August with Delta, and we are so grateful for that. We know vaccines haven’t prevented COVID, but it has prevented people from getting very sick and dying.”

Smith said a new vaccine geared to cover some of the COVID variances could soon become available.

According to the Associated Press, a group of advisers to the U.S. Food and Drug Administration on June 7 recommended use of the Novavax shot, which would be a two-dose vaccine for those that have not taken Moderna, Pfizer or Johnson and Johnson.

Neither the FDA nor the Centers for Disease Control have approved the vaccine’s use.

On June 25, the Port Arthur Health Department began vaccinating everyone 6 months and older. However, Smith said they have seen a small number of children ages 5-11, and as of Friday only three between 6 months and 4 years.

“Parents may need some time to think about it,” Smith said. “We want to let parents know we’re here to help if (they) have questions or concerns, and we’re still at the TAMS building with vaccines available for every age group.”

“The latest information from public health officials is that COVID will continue to be an issue for Texas through the July 4th holiday, and for at least a few weeks beyond that,” Hardin County Judge Wayne McDaniel said in a written statement last month. “That may prove to be true, but hopefully, it will not. Most cases are expected to be mild to moderate. Hospitals are not expected to surge to capacity as they have in the past.”

Smith said most people contracting COVID are experiencing lighter symptoms more like allergies or a cold.

The availability of home testing, she said, could also sway numbers as those positive tests are rarely reported.

However, she said, the department does receive a number of calls for COVID testing sites. To view a list of centers in Jefferson and Orange counties, click here.