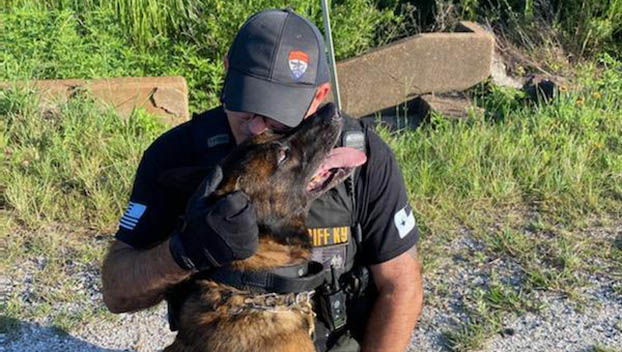 Assisting in the search was JCSO K9 Duc with his partner Deputy Crain.

At 6:43 a.m. Tuesday, a Jefferson County Sheriff’s Office deputy was en route to a wreck on I-10 when he came across a 2019 Red Dodge Charger stalled in the lane of traffic near Taylor Bayou.

The Deputy began speaking to the four male occupants of the vehicle. As the deputy began running the license plate, all four occupants began fleeing on foot.

It was discovered that the vehicle had been reported stolen in Beaumont on June 30.

Deputies were able to take two of the suspects into custody very quickly.

An extensive search of the area by land and air did not immediately result in the capture of the remaining two suspects.

Deputies spoke to nearby residents and made them aware of the situation.

At 12:05 p.m., a citizen reported seeing the two remaining suspects near the same area as they exited the woods.

Deputies responded and after a brief foot chase, took the remaining two suspects in custody.

The Jefferson County Sheriff’s Office wishes to thank Texas DPS, Texas GaParks and Wildlife and Constable Pct. 4 Werner’s Office for their assistance. Also, assisting in the search was JCSO K9 Duc with his partner Deputy Crain.