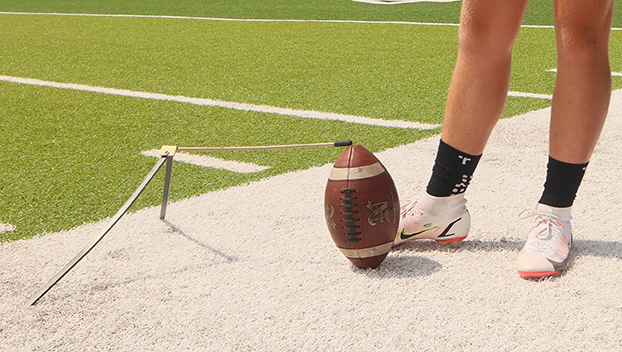 A football is teed up for Carter Piletere on the Nederland High football field. (Chris Moore/The News)

NEDERLAND — The kicker position can be very lonely. Kickers often practice by themselves and take the majority of the blame if a game-winning or game-tying attempt is missed.

Nederland kicker Carter Piletere has spent the past few summers perfecting his craft, but said there is nothing that can mentally prepare one for the pressure that comes with the job.

“You definitely have to have a short memory,” he said.

“You have to forget when bad things happen. And they are going to happen. You are going to miss a kick, eventually. You just have to go in and know you have practiced the same kick you are about to kick thousands of times. You know you can make it, and it is about confidence.” 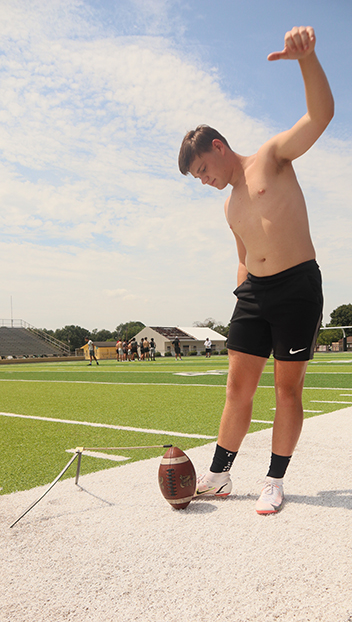 Nederland kicker Carter Piletere gets in some practice this summer. (Chris Moore/The News)

Piletere has been to several camps to increase his accuracy as he prepares for his senior season.

“I always knew I had the leg,” he said. “I have just been trying to get more consistent and do things 10 out of 10 times. It has come a long way. I have gotten more consistent than I ever have been.”

The senior said he has kicked a 62-yard field goal and an 80-yard kickoff in practice.

He has booted a 41-yard field goal and 75-yard kickoff in game action.

Piletere does not have any college offers; yet, but has been in talks with some colleges and hopes the offers start rolling in soon.

Nederland Head Coach Monte Barrow said having a good kicker takes a lot of stress off a team.

“It is something you don’t have to worry about,” Barrow said. “You don’t just go out and make a kicker. Carter has developed himself into a good kicker. He has put in the time and work on his own. There is not a lot of time in a practice dedicated to everyone watching him kick. They do a lot on their own, and he is disciplined enough to do that.”

The coach also said Piletere is athletic enough to play anywhere on the field.

“If he wanted to get out there and play, he is probably one of the better athletes we have,” he said. “He can play baseball and soccer, but he has really concentrated on wanting to get to the next level kicking.”

Piletere’s main goal is being as consistent as possible throughout 2022.

“I would like to go perfect on field goals,” he said. “I want to get really consistent with my kickoffs and get as many touchbacks as I can.”