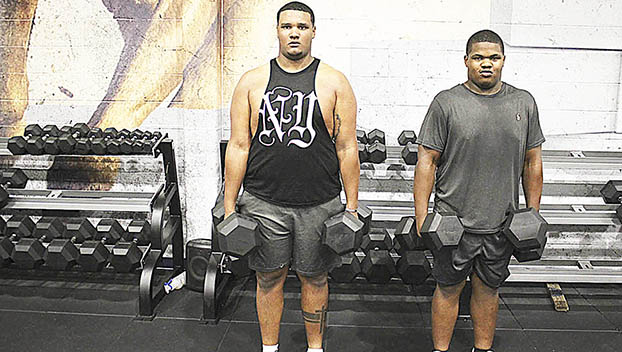 After all, they get to line up in the trenches for the most winningest high school football program (winning percentage) in the history of the state of Texas.

Both can’t hardly wait for the “real” season to get rolling, but meanwhile, they are working hard to get prepared.

“We’ve had a great turnout through the summer, and all of the guys are focused in,” Wilson said. “We had a really good offseason, and it has carried over into the summer.”

“We’re really locked in and focused,” Heard said. “We’ve got a lot of people out here. What’s great is that all of the young guys are out here, soaking everything in and working to get better and better.”

“Coach Bell, he is so great,” Heard said. “He brings so much intensity and he is such a motivator. It’s different from our workout programs in the past but it’s really working well. We’re seeing guys really improve, not only in their strength, but their stamina, too.”

Wilson also loves what Bell brings to the table.

“Coach Bell knows what it is all about, being a former Mustang great,” said Wilson. “He really pushes us. What’s even better is that he pushes us to be better people. He always gives great motivational speeches, and everyone soaks it in. He gives some great life lessons.”

Lessons is what Heard and Wilson look to teach a lot of the younger Mustangs offensive linemen. Both were key cogs as starters in the trenches last season, and Coach Hickman speaks big things about the talented duo.

“We’ve got some guys that know what it is all about,” Hickman said. “Davin Heard and Andrew Wilson, those two seniors are ready to step up and lead the way. It wasn’t long ago they were looking up to some top-notch upperclassmen, and now they are ready for that role. Those two have really been pushing our younger ones hard. They know what it is like in the trenches on Friday nights, and the younger kids are certainly listening to what they have to say.”

“We’re ready for that challenge for sure,” Wilson said. “We have some experience back, and we also have a lot of young guys. It’s pretty awesome to see this many linemen-type of players out here. We’ve been averaging about 40 during our linemen sessions.”

Heard is ready to step in and take a leadership role.

“Andrew and I, we know what it is all about,” Heard said. “The intensity level is so much higher on Friday nights, and that’s what we want to make sure the younger  guys understand. They are soaking it all in so far.”

The Mustangs are two months away, and Heard and Wilson are ready to keep the proud traditions going.

WO-S has won 11 straight district crowns and has advanced to 10 out of the last 11 Class 4A Region III Division II Championships. And, of course, no one can forget those four straight trips to the Class 4A Division II State Championship Games that included a pair of state titles in 2015 and 2016.

“Being a senior, I want to go out there and win big,” Wilson said. “The tradition here is like no other. We have the same goals we have always had here and that’s to win. We’ve got the talent to do it for sure. We just have to keep working hard, pushing everyone to get stronger and get that edge that has always put us on top.”

Heard feels the Mustangs will be ready to roll when the Friday Night Lights are turned on.

“We know we have the talent to go out there and win each and every time,” said Heard. “We just have to stay focused on what we have to do when the season starts. It’s good to look ahead a little in the summer with the workouts and all. The season is a little different. The mindset changes, where you have to look and concentrate on who you will be facing week to week, instead of looking three or four weeks ahead. We just need to go out and play Mustang Football.”

Story written by Van Wade of the Orange Leader