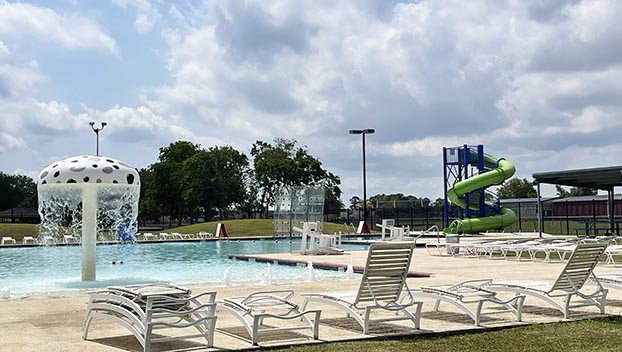 The City of Nederland's public pool will be staffed this summer by the YMCA of Southeast Texas. (Monique Batson/The News)

NEDERLAND — A partnership between the City of Nederland and YMCA of Southeast Texas is running well, officials said.

Friday will mark one month since the YMCA began overseeing all of the staffing for the Nederland swimming pool.

Nederland City Manager Chris Duque said there were a few bumps in the road in the beginning, which is to be expected during a transition, but everything is going well. One of the issues had to do with the pool’s chlorinator.

“We were constantly fighting it but it’s back under control,” Duque said of the chlorinator. “We wanted to make sure the pool was safely available. One of the biggest priorities is safety and we had to make sure we had the chemicals just right. It may upset some people, but we have to be safe first.”

Lifeguard staffing was the other issue.

The city began accepting proposals during the winter, ultimately entering into a partnership with the YMCA, which had been providing lifeguard training for pool employees in past years.

There was a period of staffing challenges due to lifeguards becoming ill, which impacts pool capacity.

Duque said they anticipate about 150 pool guests during the upcoming July Fourth celebration, while on other days there aren’t as many guests.

“It’s been so hot this month people are going to go to escape the heat,” he said. “We haven’t had very many weather-related issues; we’ve had a few such as lightning.”

Kevin Pearson, CEO with the YMCA Southeast Texas, is pleased with the partnership.

And, with the YMCA having two pools, they can hire people to work inside (YMCA) and outside (Nederland pool).

Last year the YMCA trained 42 people as lifeguards and are getting close to that number this year.

Pearson is pleased the YCMA is able to have swim lessons at the Nederland pool. The lessons are done three days a week and the YMCA is offering a special rate for Nederland residents.

There is a lifeguard shortage nationwide, Pearson noted. One possible reason is that some cannot pass the prerequisite swim of 300 yards. The pandemic, which lead to the closure and shut down of many activities, may have led to people being out of practice. That, coupled with about a decade of pool closures may also play a part in the loss of the skill.

“I’m liking the partnership with Nederland. It’s a great way for us to get in the community and teach swim lessons,” Pearson said.

Duque said news of the nationwide shortage of lifeguards might help people locally understand the staffing issues that led them to contract with the YMCA.

“It’s not just a Nederland or a Southeast Texas thing; there are news stories about how it is nationwide,” he said.

Duque thinks the City Council will want to talk about the partnership once the pool season is over to see how it went and to see what they would like to do moving forward with the next season.

The city will continue maintaining the pool in the form of maintenance and upkeep, and there will be no monetary loss to the city as a result of the partnership.