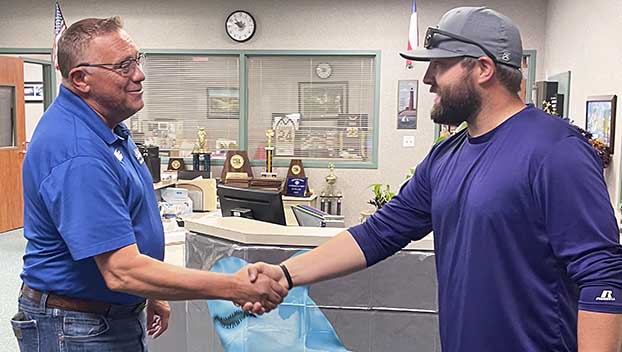 SABINE PASS — For Cody Almond, education and sports are in his blood.

So it’s no surprise the athletic director found a way to combine each while still working with the community in which he was raised.

Almond was selected as the June Teacher of the Month sponsored by Philpott Motors and on Monday was surprised at Sabine Pass High School with the honor and a $500 gift card.

And even though it was mid-summer, the athletic director was hard at work.

“Right now we have our sports and conditioning camps,” he said. “We do some conditioning and workouts for two hours just to build strength and stamina for starting football and volleyball in the fall.” 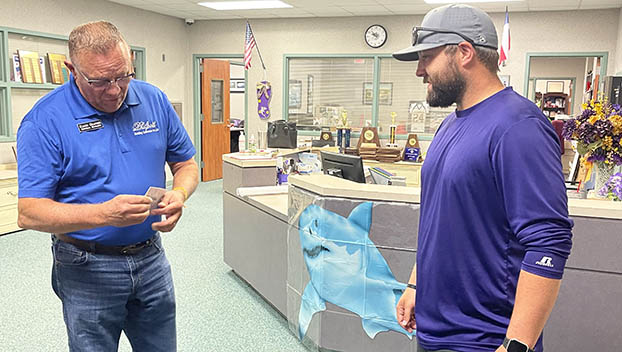 “He’s excited about providing the best opportunities for them and finding ways to display their talents. That’s huge for the kids to know that. Not only is he pushing for them to put forth their best, but he puts forth his best, as well, because those two forces together bring about success.”

Almond was raised in Sabine Pass in a family of educators.

“Everyone’s been in the education field. I’m a big sports guy, and that gave me a pathway to get into the community and do sports.”

He began his career in the Sabine Pass Independent School District as a middle school math teacher and soon moved to a coach and physical education teacher. Beginning this fall, the 31-year-old officially starts a new position as athletic director.

Almond said while Sabine Pass is not a large area, the school’s footprint extends far from the sand.

“We’re small, but we have transfers, so we have kids scattered across Southeast Texas that come here,” he said. “We have a good community here, but it’s also broad and all around Southeast Texas.”