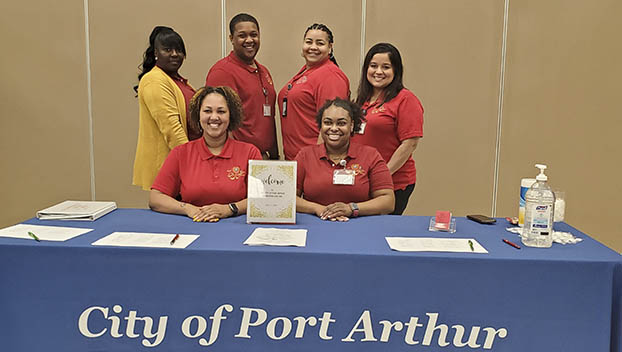 Nearly 300 people attended a job fair earlier this month as the City of Port Arthur works to fill more than 40 vacant positions.

“Overall the job fair was a huge success,” said Director of Human Resources Trameka Williams. “Participants came out and showed their interest in working with the City of Port Arthur.”

Williams said a majority of the 286 applicants at the June 14 event were Port Arthur residents.

In May, city staff said they were working to fill 49 open positions: three in parks and recreation, 17 in public works, 15 in utility operations, and 14 in other departments such as police, non-civil service, IT and finance.

The job fair, which was held at the Robert A. “Bob” Bowers Civic Center, was one of several proposals made by staff to fill the vacancies. Another proposed solution is restructuring employment requirements and necessary qualifications for applicants.

Williams said parks and recreation, public works and utility operations remained busy throughout the time frame of the job fair, and several introductory interviews were done at the time. Department heads are working to bring qualified individuals back for a formal interview.

“Fire and police were present giving out important information on recruiting and explaining what steps are needed to secure a job as a police officer or firefighter,” she said.

Of the applicants, Williams said several had commercial driver’s licenses, which was previously cited as a reason for the number of unfilled positions. However, the city works with the Economic Development Corporation and Lamar State College Port Arthur to get CDLs for qualified candidates.

Councilwoman Charlotte Moses complimented Williams, her staff and city department heads on their efforts “to get Port Arthurans hired.”

“I want to be able to be part of the next one and just see the people who are applying for jobs from Port Arthur,” said Moses, who was unable to attend due to health reasons. “They’re here, they exist (and) we need to hire them. I’m just elated we can develop our own pool of people.”

Williams said a second job fair is expected, but a date has yet to be set.

“I think we are moving in a more harmonious type relationship with council and HR and even with the citizens of Port Arthur, being sure that they are going to be considered — those who can qualify — for employment with the city,” said Mayor Thurman Bartie.