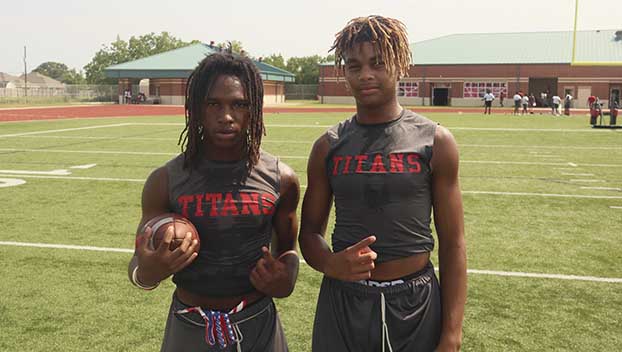 Memorial’s skill group on the offensive side of the ball has a completely new look this year.

The Titans’ leading passer, top three rushers and top three receivers all graduated in the spring, but that does not mean Memorial players are hurting for talent when strapping on pads.

While talented new faces are all over the roster, Head Coach Brian Morgan is turning to two underclassmen to tote the ball for the Titans. Sophomore Ja’Coryn Baker and freshman Amante Martin are exchanging snaps at running back in practice.

Martin set a high bar for the Titans with a state prediction. Martin said his speed is a good compliment to Baker’s abilities.

“I feel like I am very explosive,” Martin said.

“I also watch games from last year and watch AJ (Hayward),” Martin said. “I watch how he hit the holes.”

Martin said he has a friendly wager with Hayward that he will be able to beat the former Titans star’s total yards record.

Both underclassmen are aware of the recent success the Titans have had on offense and hope to live up to the standard.

“I think both of them are very talented and different backs,” Morgan said. “They are both all-around backs. It is going to all be about how they adjust to the speed of the game. I know in time they are going to be really special. Are they going to be special this year or next year? When is that going to happen? I think you are going to see special things out of them. You will see some mistakes, too. We are going to have to live through that, but they have some abilities that are going to be fun this year.”

Baker was a standout on Memorial’s freshman team last year, while Martin showed world-class speed as an eighth grader.

“(Baker’s) work ethic is great,” Morgan said. “He runs great and aggressive. Amante is super young, but has matured early. He doesn’t look like a freshman. He has outstanding speed. He catches the ball unbelievably well. They both have been great at learning, too. They know what to do, which is huge. Now it is on their physical ability and not their mental ability. It is going to move fast for them.”

The Titans are currently in the skills portion of summer and transition to pads in August. The Titans’ first game is against Port Neches-Groves Aug. 26.