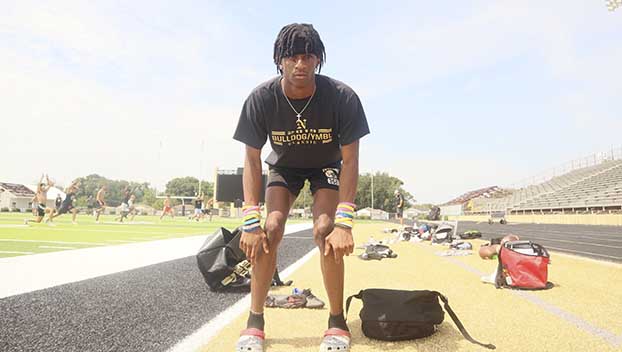 Ned Roman: Travis Roman will play both sides of the ball for Bulldogs this season. (Chris Moore/The News)

NEDERLAND — The Nederland Bulldogs football team is not traditionally known for their blazing speed, but one player turned heads at a recent camp when he clocked a 40-yard dash that some NFL players dream about running.

Coaches from all over huddled around to congratulate incoming Nederland senior Travis Ramon after he ran a laser-timed 40-yard dash at a camp.

Roman ran a blazing 4.37, which puts him in pretty rarified air. For reference, that time would’ve put him in the top 20 out of 324 players at the 2022 NFL combine.

Roman, who will play on both sides of the line for the Bulldogs this season, said the time drew a lot of attention.

“That was amazing,” he said. “I didn’t know I was going to run that. That was my first camp. I was coming off not doing anything for like two weeks. All of the coaches ran over. It was crazy. I never ran anything like that.”

“They said they will keep an eye on me and come to some of the games this season,” he said.

Nederland Head Coach Monte Barrow said Roman is one of those athletes who has a lot of qualities you can’t teach.

“He is long,” Barrow said. “He has height and speed. He brings a level of athleticism that you hope you can use in good matchups on both sides of the ball.”

“It is rare for us in the time I have been here,” he said. “We don’t get the guys that are going to college for track very often. You get some here and there. The guy that can make a difference with that is always good to have on the team.”

Barrow said Roman is also a good kid and praised his work ethic.

The speedster knows what it takes to be good in Nederland. His brother Tyler Jackson graduated from Nederland in 2021 as the basketball team’s leading scorer and rebounder.

“We are very competitive,” Roman said. “He has always been way taller than me. I always wanted to beat him. He always made me be better as a person.”

Roman has high hopes for the Bulldogs this season.

“I feel like we will be good,” he said. “I feel like we need to come together and play as a team. We lost a lot of our good people. We just have to stay motivated, patient and coachable.”

Roman said he is up to playing on both sides of the ball but admits it will be a challenge.

“I know I can do it,” he said. “I have been training a lot with coaches. They have faith in me.”