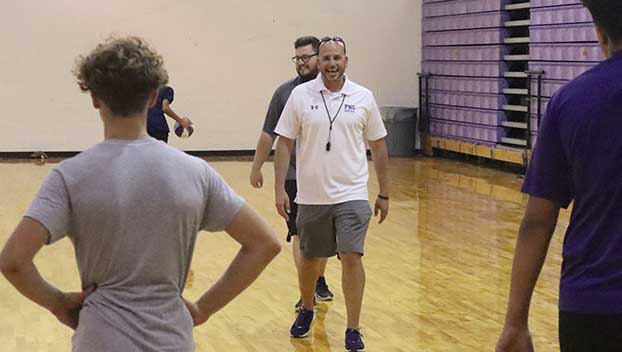 PORT NECHES — The high school basketball season is four months away, but programs are hard at work during the summer using allotted time by the University Interscholastic League for skill practice.

At Port Neches-Groves, the hoops team goes through the strength and conditioning program with the football team and then returns twice a week to work on basketball drills.

Ian Eberhardt, who was PNG’s leading scorer last season, is working with his teammates this summer to prepare for November.

“The summer workouts have been great,” Eberhardt said. “The coaches have been pushing us to a new level. They tell us how we need to be playing basketball and staying in shape, even it if it going out for a run every now and then.”

The UIL allowed for athletic programs to have 2-3 hours of skill work per week in 2019.

The rules have expanded some since, and PNG Head Coach Chris Smith likes being able to see the players a few times a week and chart their progress.

“These summer workouts are really great for us,” Smith said. “It really gives us a chance to keep in touch with the kids. We don’t go a long time without seeing them. But we don’t want to burn them out, either. We go Tuesdays and Thursdays and we have a summer league game in there, too.”

Indians Course allows players from all sports to lift weights and do conditioning drills with the football program.

Smith preaches the importance of kids being able to get stronger through the program and how it will benefit them on the basketball court.

Coaches are not allowed to participate in the summer league but many go watch to support their respective teams. Smith said the league allows for student athletes to take control and see which players emerge as leaders.

Eberhardt has taken the summer easy after a leg injury ended his junior season early. He is still participating in the summer league and working out, but added he is paying attention to his body in order to not over do it.

“I have been doing a lot of band work,” he said. “I work on a lot of stretching. I am making sure I am on it when I am supposed to be on it but I back off when it starts hurting. I am working on restoring that strength back to it.”