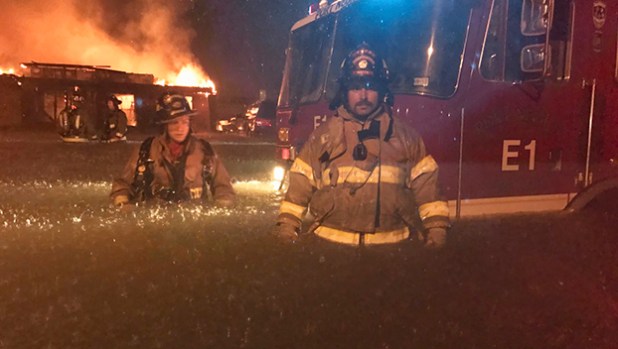 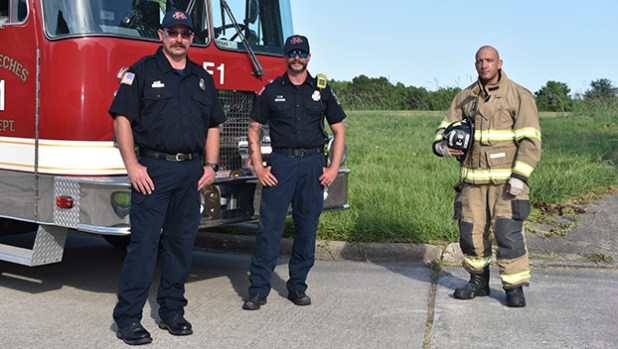 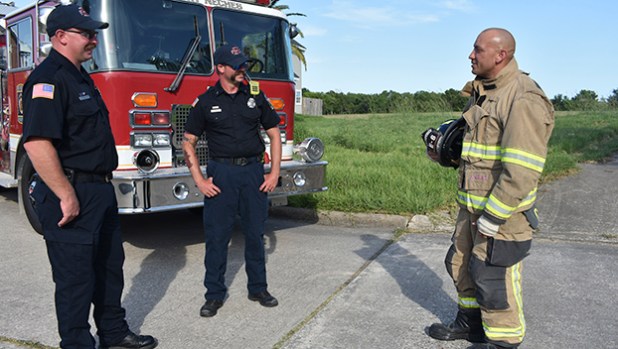 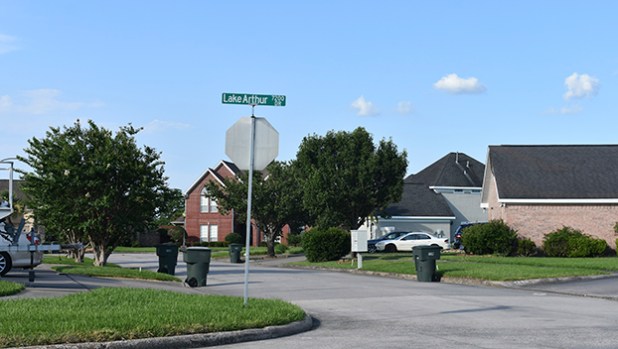 The cul-de-sac off Lake Arthur Drive onto Kylewood Court in Port Arthur is pictured. The area was flooded during Hurricane Harvey. (Mary Meaux/The News)

Headlights from a partially submerged fire truck shone through Hurricane Harvey’s floodwaters as a fire raged in the background and two firefighters stood in waist deep water.

The raindrops that hit the floodwaters bounced in a cadence of sorts, easily visible in the illumination of the headlights in an otherwise dark night. The facial expression of the men was stoic.

This was the scene captured in a photo taken during the hurricane and one that went national.

The men from the photo — Port Neches Firefighter Zach Watts and Engineer Gerald Finley met with Port Arthur Firefighter Clint Aslin on Wednesday in front of a vacant lot on Kylewood Court in Port Arthur, where, nearly five-years-ago they battled a blaze in waist deep floodwaters.

The reunion was cordial as they shook hands and chatted about the night of Aug. 29, 2017, and of current events.

Not far from where they stood was the 1993 KME brand fire truck that pushed through the record breaking flood of Harvey. The truck is part of Port Neches Fire Department’s fleet and is still in good working order, a testament to the older model vehicles.

Former PNFD Chief Ken Doise had a hand in having the truck modified to move the exhaust up high, which enabled the truck to survive.

The night of the flood was chaotic as rescues were undertaken across Port Arthur and surrounding areas. PAFD was unable to get to the blaze on Kylewood Court and had flooded out two fire engines and a ladder truck during that night. The roads to the scene including Lake Arthur Drive in Port Arthur were under many feet of water so the call requesting assistance went out.

PNFD was able to make it in a back way and, as the truck moved through the water, picked up Port Arthur firefighters who were walking to the scene. Fortunately, no one was inside the home when the combined group arrived. Watts and Finley remember the other firefighters hanging on as the truck maneuvered to the cul-de-sac.

None of the men were focused on their wellbeing.

The three firefighters recalled the measures undertaken to extinguish the fire.

With fire hydrants under water, the easiest source of water was right where they were standing, so the fire hose was dropped in the street to draft water to douse the fire.

But as the men were about to pull water from the street, Finley snapped some photos, one of which made the cover of a firefighter’s publication and was widely circulated online.

The fame and attention the photo brought wasn’t altogether welcomed by the firefighter who shies from publicity.

“It was cool and all, but I’d rather it (attention) go to somebody else,” he said.

Finley’s reason for taking the photo wasn’t to show bravery but to document the event.

“We usually try to take pictures when we can, depending on where we go and what we are doing, so we have a reference to go back on,” Finley said, adding photos such as the ones taken during the hurricane can be used later for training.

On Wednesday Finley walked to the door of Engine 1, speculating where the water level was the night of the hurricane. With the street level lower than the lot where the home was once located, the water came to the bottom of the door which is about waist deep to the men.

In reality the water could have went to the windows, and the truck would still have been able to roll through, he said.

“Basically we started calling it a submarine,” he said.

Aslin, who was standing behind Watts in the photo, remembers the national headlines and how the photo went viral.

“I was amazed at it, that someone even took a picture,” Aslin said. “In the moment I didn’t think they were taking pictures, then you see it blow up and that it went viral.”

There are take-aways from the event, preparation.

Watts, who has been a firefighter for seven years, said they are as prepared as they’ll ever be. They continue to train and practice on tactics, not just key firefighting. They stay up-to-date on new techniques as well as being prepared for storms, evacuations and more.

“We don’t want any fame, we just want to do the job and help people,” he said.

In looking back, Finley said most of what they experienced during Harvey was unexpected but the knowledge will be used “next time, if there is a next time.”

Aslin, who ahs been a firefighter for 10 years and is certified as a paramedic and police officer and is part of the Port Arthur Police Department’s SWAT team, said looking back, it was a team effort with everyone including Port Arthur and surrounding departments unified to pick up the slack.

At almost every turn it was flooded. Places he’d never heard of were calling for help, there were so many rescues.

That night there were multiple fires, multiple rescues and “everything you can think of happened that night.”

Fighting the fire during a hurricane was a defining moment.

“You put every insecurity aside and get things done,” Aslin said. “That night prepared us to look ahead. Every year we get scared of another hurricane, another event. But looking back, you kind of feel better because you know how it went and know what to do to get it done.”