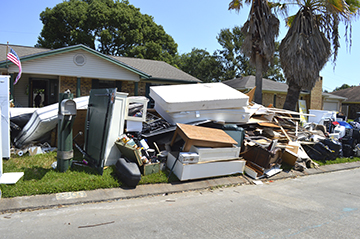 The storm damaged or destroyed approximately 80 percent of homes in Port Arthur, which has one of the highest unemployment rates in the state.

With people not able to afford to fix their homes on their own, many were waiting for government assistance that was slow or never came.

Former city councilman and Port Arthur Community Action Network (PA-CAN) Founder John Beard said was one of several involved in filing a complaint to the Department of Housing and Urban Development, stating the Texas General Land Office discriminated against communities of color when disbursing money from a $4 billion Community Development Block Grant for disaster mitigation.

Earlier this year, HUD determined the complaint was valid.

“Having gone through every hurricane since 2005 with Rita, Ike, Gilbert, Humberto and finally Harvey, a pattern emerged with the method of distribution,” Beard said. “On a per capita bases, cities that were smaller than Port Arthur, had much smaller populations and had fewer homes were getting much more money than the city that was more impacted than all of the cities.”

According to 2021 population estimates from the U.S. Census Bureau, Jefferson County is 59.1 percent white, 34.1 percent Black and 22.1 percent Hispanic. The median household income is $51,248.

The largest number of Harvey-related applications for assistance from the Federal Emergency Management Agency was 13,654 and came from the Port Arthur zip code 77642, bordering Groves which recorded the second-highest amount of rainfall from Harvey at 60.54 inches. One Beaumont zip code, 77705, had 8,269 applications.

“In terms of the amount of damage suffered by people of color or who are economically disadvantaged at the hands of Harvey, the only city to see more damage was Houston,” Beard said. “We just saw the pattern and it happened repeatedly. It was brought to my attention sitting in the meetings with the Regional Planning Commission, the City of Port Arthur, FEMA and the GLO. When we raised questions, the GLO rarely could respond or answer. Even when we turned in written questions, there was no response.”

Beard said HUD’s response to the complaint validated what many knew was going on with money distribution.

“They found that, indeed, the Texas General Land Office had discriminated against people of color in Southeast Texas and in Houston,” he said.

GLO contended that part of the money lock up was due to the fact that the government was quicker to give money to homeowners than renters. Beard said he knew of plenty of people that owned homes in Port Arthur who are still waiting for funding five years later. Much of the public’s outcry also has to do with the lack of transparency.

“There are still homes from Rita and Ike that still have blue roofs,” he said. “There was a lady I know of who lived in Port Arthur and had a home damaged in 2008. She applied in 2008/2009 to the GLO for funding to rebuild her home. Between then and Harvey, her husband died and she retired and is living off a fixed income. Even though she did everything she was supposed to do, they told her a couple of years later they ran out of money.”

Beard said the answer from GLO did not hold up after Harvey hit and the federal government told the state of Texas it would not receive more funding until the Regional Planning Commission used all of the unspent funds from Ike.

Beard said he has not seen enough infrastructural changes to prevent the damage from being as severe if there is a next time.

Even though HUD came down on the side of Beard and other community organizers, Beard said there has been little-to-no progress in changing the process by which funds are distributed. He also said he has little faith anything will be better if and when another natural disaster strikes.

“You are better off flying over the cities and dumping money out of an airplane than you are letting GLO do it,” he said. “Every time they have done it, it has been complications, problems and issues.”